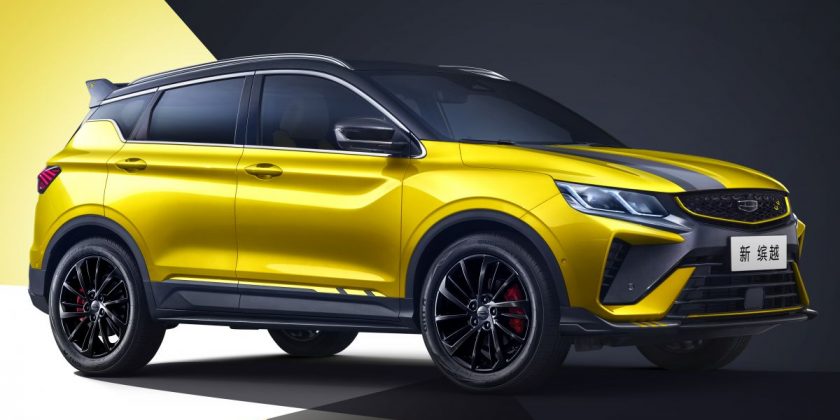 The Geely Binyue Pro has been given a facelift, with the original iteration of the compact SUV having gone on sale in China last year, subsequent to the pre-facelift Binyue that was launched in 2018.

Here, the Proton X50‘s base vehicle gains revisions inside and out, starting with a new honeycomb mesh grille that replaces the design of the outgoing model, and beneath that is a grey portion of the front fascia that is a more distinct section from the rest of the front bumper.

The headlamps are similar in shape to those of the pre-facelift model, though these have been updated to light up a welcome sequence when the vehicle is unlocked. Meanwhile, the grey section accentuates the ‘X’ design across the front of the Binyue Pro facelift, while the front lower lip extension has been simplified into a single layer, compared to the pre-facelift model’s dual-layer look.

On this sportier-kitted variant in yellow, the Binyue Pro adds a trio of body-coloured stripes to the grey sections of the front bumper lip and lower door trim. The rear bumper has been redesigned to wear a more prominent diffuser arrangement, and this now also receives a horizontal body-coloured stripe through the middle section.

On the white and metallic blue exterior finishes, the contrasting stripes are red and white respectively. Up top, the tailgate on this sportier variant is joined by what appears to be a carbon fibre-look tailgate spoiler with a body-coloured ‘S’ motif on the end plate. All versions of this Binyue Pro facelift are depicted with a contrasting black roof finish, regardless of exterior paint finish.

Rolling stock for the Binyue Pro facelift is a set of 215/55 tyres, with 18-inch wheels in two machined-finished designs and a third in a black-painted finish. The latter option with the sports kit also gets paired with red brake calipers.

Inside, the Binyue Pro facelift largely retains the architecture of the pre-facelift model, though notable changes include a larger infotainment screen that now measures 12.3 inches across compared to the 10.25-inch screen in the previous version. Driver instrumentation continues to be a digital unit.

Images here show interior upholstery that have a two-tone scheme, with black contrasted by the vehicle’s exterior colour; this will be yellow in the unit with yellow exterior paint, and so forth. The leather multifunction steering wheel also gets a two-tone trim in this fashion. Also shown here is a new gear selector lever, while added natural light comes courtesy of a full-length panoramic sun roof.

According to Autohome.cn, the interior trim panels are of a matte metal-look finish and incorporate ambient lighting offering a choice of 72 colours, with several light animation modes including those that can be matched to the chosen driving mode, the vehicle’s speed, the rhythm of music being played and more.

At the moment, these official images have not been accompanied by technical specifications. For reference however, the current Geely Binyue has been sold with a 1.4 litre four-cylinder turbocharged petrol producing up to 141 PS at 5,200 rpm and 235 Nm of torque from 1,600 to 4,000 rpm, and a 1.5 litre three-cylinder turbo petrol rated at 177 hp and 255 Nm of torque.