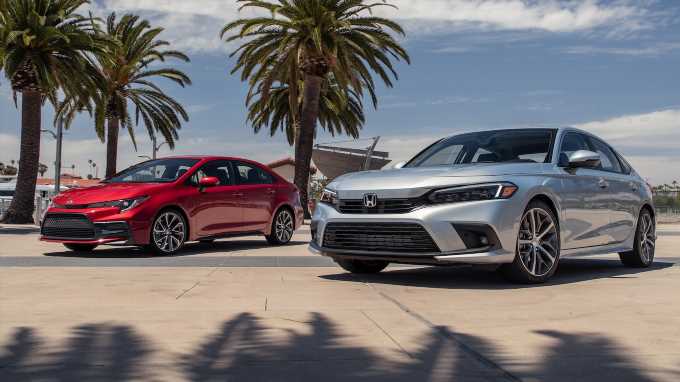 Honda Civic versus Toyota Corolla is one of the most entrenched rivalries in the automotive marketplace. The two small cars are vitally important not only to their makers but also to millions of Americans who depend on them for straightforward, reliable transportation. An all-new redesign of either is rightly expected to upend the compact car segment, which is still strong despite the popularity of SUVs, and neither company wants to get its car wrong. Bringing them together for a comparison test ought to presage a knock-down, drag-out fight, but the 2022 Honda Civic Touring is so much better than the 2021 Toyota Corolla XSE it isn’t even funny.

Now, this isn’t how we’re supposed to do things. We’re supposed to write these things in a way that keeps you glued to your screen, balancing the successes and failures of each vehicle and keeping you in suspense until the big conclusion. Sometimes, though, that kind of presentation is disingenuous. This is one of those times. This isn’t a close comparison. One car is clearly better than the other, and the only thing to do is tell it to you straight.

What Makes the Civic So Much Better?

Here’s a line from the notes turned in by our judges in this comparison: “Other than some elevated interior noise, I am struggling to think of anything the Civic does wrong. It’s an incredibly solid effort.”

Truthfully, both cars could use some work in the interior noise department. The Civic, as has long been the case with Hondas, gets loud inside on bad pavement and when the engine is working hard. The Corolla, meanwhile, has an even more raucous engine and develops a lot of wind noise around the door mirrors at higher city speeds that only gets worse as you go faster. It is quieter over bad pavement than the Honda, though.

What About the Rest of the Interior?

Which interior you prefer depends a lot on who you’re trying to make happy. If it’s just the driver, the Corolla puts up a good fight. If it’s everyone in the vehicle, Honda wins going away. The Toyota gets points here for its very comfortable front seats, but that’s about the only outright win. The Civic’s interior is more spacious, has vastly better ergonomics, and looks and feels premium.

“It’s here, in competition with its primary rival, that you start to feel the Corolla’s drawbacks,” MotorTrend en Español editor Miguel Cortina said. “Although it’s only 3 years old, it feels even older—especially when the Civic is brand new, not to mention the almost equally fresh Hyundai Elantra and Nissan Sentra.”

The most obvious differentiator is in how things feel and the impression they give. The Corolla’s exterior door handles feel flimsy, and the door sounds hollow when you close it. The turn signal stalk feels and sounds like it’s going to snap off in your hand when you use it. The materials are fine for a car at this price point, but Honda didn’t settle for fine. Everything you touch, pull, push, or twist in the Civic feels like it was borrowed from a more expensive car.

Then there’s the space. The Corolla is cozy at best. The front passenger’s inboard knee is always resting against the center console, which is narrower than the Civic’s but somehow still in the way. The rear seats of the two cars have roughly the same amount of space according to the tape measure, but the Corolla feels tighter, as you sit so high it feels like you have to duck to look out the side windows like you would on a plane. The Civic feels spacious and airy, with excellent sight lines and plenty of room to spread out, no matter which seat you occupy, despite being within an inch or two of the Corolla in every dimension inside and out.

Then there’s the matter of how the interior is designed to serve those aboard. Honda pulls out another clean victory here with controls, cupholders, chargers, and everything else conveniently located and easy to manipulate. The wider center console allows the cupholders to be placed next to the shifter rather than behind, as in the Corolla, where they’re under your elbow. The wireless phone charging pad is larger than it needs to be, making it easy to reach into, whereas Toyota crammed its pad up under the dashboard. Two USB ports are right above the Honda’s charging pad, whereas Toyota stuck a single port up under the dash next to the glove box, almost as if they forgot to include one until the last minute. The Civic also has a pair of easily accessible USB ports for the rear seats, which Toyota does not, though there’s one in the center armrest you’ll never use. Does Toyota not know people like charging lots of devices at once, and from every seat?

What About The Tech?

Like USB ports, when it comes to tech, the Civic has a lot more. On paper, both cars have suites of passive and active safety features as standard equipment, but the capabilities differ in practice. Toyota’s Safety Sense 2.0 system includes the kind of lane keeping assistance that’s been around for years, intervening when you’re actually leaving the lane. The Civic’s Honda Sensing package is more akin to what Tesla is doing with Autopilot. Not only does the system display in the digital instrument cluster all the vehicles around you it can see, but it also follows Tesla in that it centers you in the lane and helps you steer, doing so nearly as well.

We will say, it would be nice if the Civic’s all-digital instrument cluster were more customizable in appearance, but it certainly looks more high-tech than Toyota’s half-analog, half-digital arrangement.

A similar critique applies to the infotainment screens. Neither is among our favorites, but both have improved recently—Honda’s more so. The tile system of arranging apps is highly customizable, but there’s a bit of a learning curve. We’re happy to see some hard buttons return for oft-used features. Toyota throws in even more hard buttons, but despite the on-screen interface improvement, it still looks and feels outdated.

Although it’s not a high-tech feature, we’d be remiss if we didn’t mention that the Corolla doesn’t even offer dual-zone climate control, which the Civic does at effectively the same overall as-tested price.

All Right, but How Do They Drive?

The driving experience is a category in which the Corolla acquits itself quite well. When it launched, we were pleasantly surprised by how much better this generation of Corolla drove than its recent predecessors, and it remains a good car to drive. The engine is responsive enough to make you think the car is quicker than it is, the transmission is smart and gets you the power you need immediately, it handles well for a compact sedan, and it rides pretty well.

Unfortunately for Toyota, the Civic drives better than any compact sedan needs to. It’s quicker, its transmission is smarter—we like how it automatically revs up the engine to help slow you going down big hills—it rides a little better, and it handles way better than anything else in the class. You don’t need to know anything about cars except how to drive them to recognize how much better the Civic feels from behind the wheel.

This is borne out in our instrumented test results, too, where the lighter and more powerful Honda is unsurprisingly quicker to 60 mph and through the quarter mile by a decent margin. It holds the road better in our skidpad and figure-eight tests, as well, pulling higher average lateral g’s on the former and posting a significantly quicker lap at a higher average g on the latter. The Corolla did win in one category, though: braking. Slamming on the brakes at 60 mph, the Toyota stopped 3 feet shorter.

The Civic’s trunk is bigger, and it’s easier to fold the rear seats for more space thanks to release handles located in the cargo area. Toyota put the release handles on the seats, which would be fine except for some odd reason they placed them near the center of the car rather than out by the doors where you could reach them without climbing into the back seat.

The Honda’s blind-spot warning system could also stand to chill out. It fires its alarm unless there’s an enormous gap available, and that just isn’t always realistic in heavy traffic.

Let’s Wrap It Up, Then

As we said, the Civic ran away with this comparison. It outclasses the Corolla in almost every way we can think of. “The Civic feels closer to an Accord than the Corolla does to a Camry,” Cortina said. “The Honda feels like a more mature car—quieter overall, more comfortable, more modern, more everything. It projects a strong premium vibe in the compact sedan segment. The previous Civic was the best among its peers, and this 11th-generation car goes a step further. The competition is nowhere close.”

Of the cars in this particular test, the Civic’s sticker was $210 more than the Corolla’s. If it were $2,100 more, it would still be worth choosing the Honda.