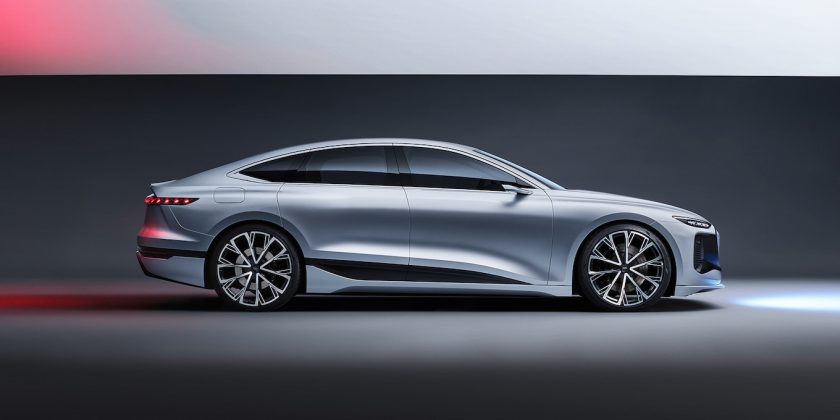 WHAT IT IS: An electric version of the A6, one of Audi’s core nameplates, as previewed by this year’s A6 E-Tron concept. Whereas Audi’s first serious electric vehicle efforts have been the low-volume E-Tron SUV and E-Tron GT fastback sedan, this sleek-looking A6 EV is a sign of mainstream things to come for the four-ring brand. And surprise: It’ll be sold alongside the more conventional-looking regular A6.

WHY IT MATTERS: Audi reports 95 percent of the concept will translate to the production car. The sleek new sheetmetal shows off the latest evolution of Audi’s design language, including the new “inverted face” front end, which swaps the traditional dark grille area and body-color front bumper treatment of its conventional cars and SUVs.

In profile, the concept car looks more like an A7 than it does an A6. Credit the fastback roofline, which imparts not only style but also slipperier aerodynamics: The A6 E-Tron concept has an impressively low claimed 0.22 coefficient of drag, just 0.02 higher than Mercedes-Benz’s pedestrian-looking EQS flagship.

PLATFORM AND POWERTRAIN: The sleek A6 E-Tron uses a new platform co-developed with Porsche. Dubbed Premium Platform Electric, or PPE, it will underpin all electric Audis—as well as Porsches and Bentleys—for the foreseeable future. This modular platform supports single-motor rear-drive and dual-motor all-wheel-drive powertrains, and it’s capable of up to 270-kW charging speeds. That’s about 80 kW less than initially promised but still 20 kW more than the quickest Tesla Supercharger.

The production A6 E-Tron will showcase PPE’s flexibility, offering rear- and all-wheel drive, as well as single or dual motors. The concept’s two motors produce a total of 469 horsepower and 590 lb-ft of torque, splitting the performance difference between the current Audi S6 and RS6. Unlike the E-Tron GT, we expect the A6 E-Tron concept to have a single-speed direct-drive transmission instead of a two-speed unit. Audi says its concept can accelerate from 0 to 60 mph in less than 4.0 seconds, which we assume the road model will match.

Thanks to its 100-kWh battery pack, the A6 E-Tron concept claims more than 435 miles on a charge—albeit as measured on the rather optimistic European WLTP test. For comparison purposes, the 2021 Audi E-Tron SUV is WLTP-rated at 248 miles of range, but its EPA rating is 222 miles. Expect the 2024 A6 E-Tron to score north of 300 miles on the EPA cycle when it goes on sale here in 2024. Assuming you can find a station capable of charging at that 270-kW max, 10 minutes of charging is said to add 186 miles of range. Juicing the battery pack from 5 to 80 percent requires as little as 25 minutes on said charger, according to Audi.