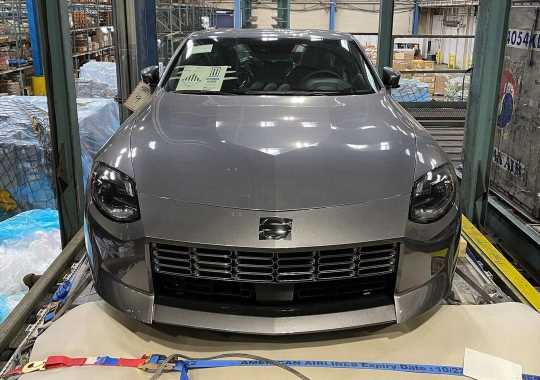 A leak of this degree that appears unplanned is highly unusual, but this is supposed to be the production version of the Nissan Z Proto concept, which everyone is already calling the Nissan 400Z. This is of course the next-generation Fairlady Z that will take the baton from the 370Z. The lineage goes all the way back to the S30 240Z from the 1970s.

We shouldn’t be surprised that this grey car, which appeared on the Instagram pages of laidoutdc4 and Nissan Arabia, looks virtually identical to the Z Proto, because the concept car was very realistic and Nissan’s chief product specialist and Mr GT-R Hiroshi Tamura said so.

Compared to the Z Proto, the minor differences we see here are red reflectors on the quarter panels, a bootlid spoiler and a body coloured roof and “bezel” of the rear glass. Here, we can see clearly the actual size of the rear screen. There’s another silver example in the Instagram video below; that car has the black roof and rear glass surrounds. Also not present are the “Fairlady Z” logo on the rear deck and unsurprisingly, the “Nissan Z” tyre markings on the prototype. Otherwise, it looks identical, and very good.

The Z Proto’s cabin looked production ready and the dashboard you see here, and the elements, confirms that. There’s a big digital panel of an instrument cluster, and touchscreen infotainment, but Nissan has elected to add three hooded analogue gauges on the dashtop, a sweet touch for a sports car. This example is an auto, and there’s a mouse-like selector in place of the good ol’ stick in the Z Proto.

The original poster of these images said in a now-deleted TikTok video that this grey Z had just arrived in Los Angeles, and the facility had previously received another unit in transit, a manual. Word is that the manual will be hooked up to a 3.0L twin-turbo V6 with 400 hp (that’s the VR engine and output in the Infiniti Q50/Q60 Red Sport), but the Z Proto has 450 PS hauling 1,475 kg in the Project Cars 3 driving simulation game. Truly exciting stuff. Surely not long now.