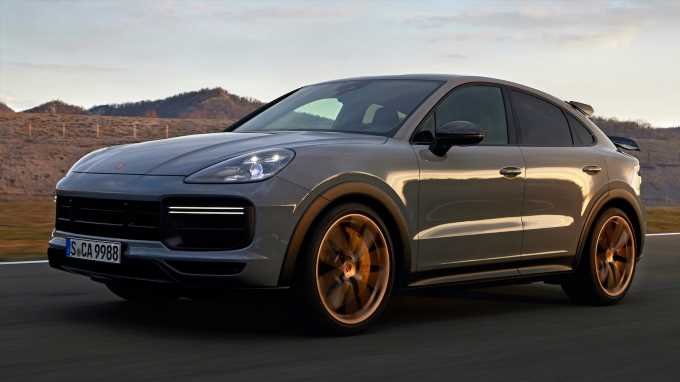 At first glance, the Cayenne Turbo GT looks much like its lesser Turbo stablemate. Those with sharp eyes, however, will note a number of small styling enhancements, such as a distinct front fascia with bigger side air intakes and a more prominent front lip, black fender arches, a set of gorgeous 22-inch gold wheels, and updates to the SUV’s rear wings, with the upper-hatch-mounted unit welcoming carbon-fiber side plates and the larger adaptive spoiler (that resides just below the rear window glass) adding a two-inch-tall Gurney flap. Additionally, the Turbo GT sits approximately 0.7 inch lower than the run-of-the-mill Cayenne Turbo Coupe.

Porsche’s performance tweaks to the Cayenne Turbo GT extend beyond its ride-height reduction. Notably, the German brand thoroughly reworked its twin-turbocharged 4.0-liter V-8 for Turbo GT duty, fitting the big engine with the likes of a trim-specific crankshaft, timing chain, pistons, and connecting rods. As a result, the flagship Cayenne model packs a 631-hp punch—90 more than the standard Cayenne Turbo, but 39 fewer horses than the gasoline-electric Cayenne Turbo S E-Hybrid.

Nevertheless, the all-wheel-drive Turbo GT’s 626 lb-ft of torque (59 lb-ft more than the Turbo) and—even quicker shifting—eight-speed automatic transmission allow this powerful Porsche to push its way from 0-60 mph in a manufacturer-estimated 3.1 seconds, or 0.6- and 0.5-second quicker than its Turbo and Turbo S E-Hybrid siblings. Given we managed to hit the mile-a-minute mark in a Cayenne Turbo Coupe in 3.2 seconds, we wager the Turbo GT ought to trot to 60 mph in well under 3.0 seconds in our hands. Keep flat-footing the Turbo GT’s right pedal and Porsche claims its sportiest Cayenne model crosses the quarter mile in 11.6 seconds.

A water-cooled transfer case ensures the Turbo GT’s drivetrain remains reasonably cool, even with a hot shoe at the helm, while a specially developed center-mounted titanium exhaust system provides the quickest Cayenne model with a distinct growl.

Of course, taking the record in the “SUV, off-road vehicle, van, pick-up” category at the Nürburgring Nordschleife requires more than a powerful powertrain, which is why Porsche also fiddled with the Cayenne Coupe’s lateral dynamics to make it worthy of the Turbo GT nomenclature. Retuned dampers, steering bits (including the SUV’s rear-axle unit), and an air suspension that’s up to 15 percent stiffer relative to that of the Cayenne Turbo complement the likes of a tweaked torque-vectoring rear end, 1.0-inch-wider front wheels, and increased negative camber to make the most of the Turbo GT’s Pirelli P Zero Corsas’ available grip. Stopping power, meanwhile, comes courtesy of 17.3-inch front and 16.1-inch rear rotors. Standard yellow-painted calipers denote the fact the Turbo GT’s brakes are of the carbon-ceramic variety, although Porsche notes black-painted binders are also available.

Like its exterior, the Turbo GT’s interior subtly separates itself from the typical Cayenne herd. Both the front buckets and two-across rear bench sport a Turbo GT-specific seat pattern, as well as faux-suede padding at the center on the seats’ backs and bottoms, contrasting gold or gray stitching, and embossed headrests. A yellow marker at the top of the steering wheel’s rims further distinguishes the Turbo GT’s cabin.

With a starting price of $182,150, the 2022 Porsche Cayenne Turbo GT Coupe stickers for $47,300 more than its respective Cayenne Turbo Coupe kin (and $13,000 more than a Cayenne Turbo S E-Hybrid Coupe). Then again, no one buys one of Porsche’s GT-badged models to save a few bucks. Instead, buyers drop the extra coin to relish in the sheer joy of driving such a focused machine. No doubt, the Cayenne Turbo GT will maintain the behind-the-wheel thrills of other Porsche GT models when it reaches our shores in early 2022. Whether or not purists take to the first-ever GT SUV is almost beside the point. Fast SUVs are fast becoming a thing, and Porsche is smart to chase the market there while showing its performance prowess.