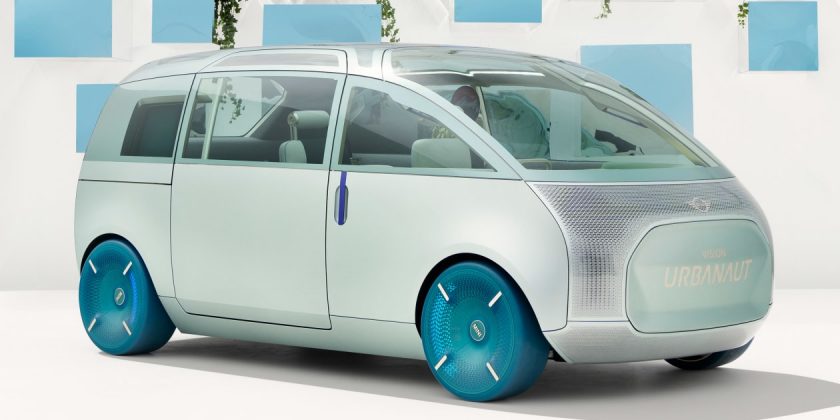 The MINI Vision Urbanaut is a driveable, radical concept, which previews some interior touches coming on next-generation MINI Hatch

MINI has made real the Vision Urbanaut concept – a highly futuristic people mover previewing aspects of the firm’s next-generation, all-electric models, arriving from 2023 with the new MINI Hatch.

It will be MINI’s centrepiece at the Digital-Life-Design conference in Munich on 1 July, where attendees will be invited to see some of the radical ideas found in the interior of the concept car for real. MINI says the concept is built to near prototype standard and is driveable.

“We have developed an idea, with the MINI Vision Urbanaut, of how we can take the MINI attributes – as here, with the focus on the ‘Clever Use of Space’ – into the future of mobility and interpret them in a typically MINI way,” explained MINI boss Bernd Körber.

The concept is fully electric, incorporates autonomous technology and shows how MINI can maximise interior space for compact cars.

The look of the Urbanuat is unlike anything we’ve previously seen from MINI. It’s a little longer than today’s Countryman crossover but significantly taller, and almost MPV-like in its proportions. But there are familiar design cues, such as digital interpretations of MINI’s headlights and grille combination on the front end.

Oliver Heilmer, Head of MINI Design said: “At MINI Design we believe that the best way to understand the overall concept behind the MINI Vision Urbanaut is to experience it. The feeling of space and the innovative materials are just asking to be explored. That is why it was very important for us from the outset to also make a physical model of the MINI Vision Urbanaut.”

Helimer is keen to put distance between the Urbanaut and traditional MPVs, which have fallen out of favour with buyers, however.

“From a personal point of view an MPV would be perfect for me,” Helimer told Auto Express in late 2020. “But there is no way I’m getting into something like this – that’s where we as MINI see an opportunity to get into an area where there is nothing.

“Directly compared, the Urbanaut is far away from this classical MPV. It’s a room-space concept – the arrangement of the interior is entirely different. We are providing a cool answer to the needs of space. It’s modern interpretation.”

MINI has not elaborated if it intends to put the Urbanaut into production, but such a model wouldn’t appear in showrooms before 2030. “The Urbanaut is meant to serve as a long-term perspective for where mobility is going, and how we address the needs of our urban customers in a car”, Kober told us.

The interior of the Urbanaut is the car’s partypiece. All passengers enter and exit via the full-length sliding door on the passenger’s side; when the car is stationary the interior is designed to feel and look like a lounge, with two front seats that rotate 180 degrees, a fixed table and a windscreen that can open outwards. The dashboard can even be lowered to create a daybed.

“MINI is about creative use of space,” Kober explained, “so we thought we’d go back to this original idea and make an interpretation for the year 2030 – a different approach to the same principles Mini had in 1959.”

The cabin layout and the exterior appearance can be changed depending on which of the three “MINI Moments” – ‘Chill’, ‘Wanderlust’ and ‘Vibe’ – the car is in. Chill sets the interior up so those inside can relax with lounge-like seating and soft lighting, while Vibe opens up the door and windows, and adjusts the mood of the cabin so it becomes a more social space.

Wanderlust focuses on the driving experience, and allows the driver to engage a fully autonomous mode if necessary. The touch of a button brings the steering wheel and pedals out, while in the absence of a digital display, driving data and navigation are projected onto the fabric beneath the windscreen. Each mode has a distinct soundtrack, too, while MINI has also developed a ‘fragrance signature’ for the interior as well, pumped into the cabin when a passenger enters.

In the short term some of the Urbanaut’s design elements will appear on MINI’s next generation of vehicles, starting in 2023 with the new three-door hatchback. “Some of the design elements integrated here – some items, trims language especially in the interior – will be translated into real series cars in the next generation in 2023,” Kober added, while the lack of leather or chrome is a theme we can expect in the next MINI Hatch.

Materials used in the cabin of the Urbanaut are almost exclusively recycled, can be recycled, or are renewable. Textiles made from recycled wool, polyester and Tencel are used for the upholstery, while MINI has also focussed on using many ‘mono-materials’ – easily reusable as in other products at the end of the vehicle’s life. Other touches include recyclable cork on the steering wheel and floor.

If and when the Urbanaut makes production, it will be based on MINI’s next-generation, fully electric platform that will first appear beneath the three-door hatch in two years’ time. MINI has already committed to becoming an electrified brand, with the shift to relying solely on electric power targeted for 2030.

What do you think of the MINI Vision Urbanaut? Would you like to see it make production? Let us know in the comments section below…