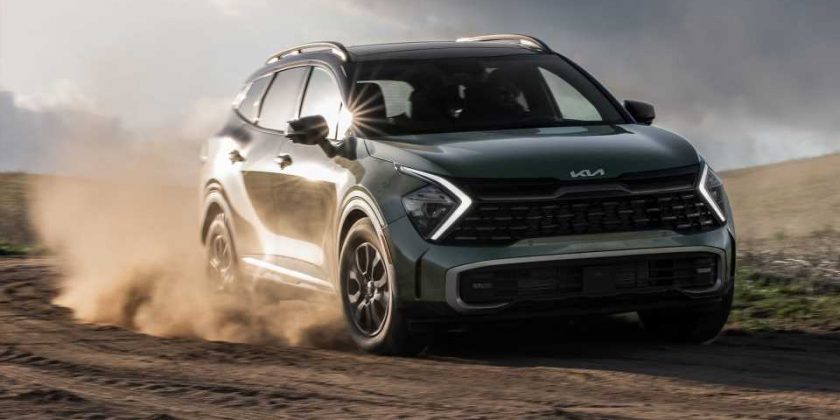 Finally, the Kia Sportage stands out for the right reasons. More spacious, more powerful, and simply more interesting than before, the 2023 Kia Sportage appears to share little with the easy-to-dismiss 2017 model I drove for a year. Yet after driving Kia’s drastically improved compact SUV on- and off-road, it’s clear owners will recognize a few similarities to the last-gen model, for better and worse.

The excellent Kia Seltos is no longer an obvious alternative to the Sportage. Now that the new Sportage is based on the same platform we experienced on the 2022 Hyundai Tucson, the American-spec 2023 Sportage is a healthy 183.5 inches long, or at least 2.0 inches more substantial than the longest trims of the Toyota RAV4 and more than a foot longer than the Seltos. Inside, the difference from old to new Sportage is incredible. The 2023 Sportage’s rear seat and trunk are both enormous, with cargo space nearly hitting 40 cubic feet behind the second-row seats. Right now, the Kia’s 39.6 cubic feet leads the class, though we’ll see what the new 2023 Honda CR-V has to say about that once it’s revealed fully.

Hybrid and plug-in hybrid models are also new, effectively replacing the previous model’s underwhelming 2.0-liter turbo I-4 for drivers who want more power or something a little different. The trendy new X-Pro off-road trim is a cool addition to the range, but the expansive screen real estate is what really catches our attention. Offering a full-size digital instrument cluster on every trim is a huge differentiator—it may not be in 10 years, but it is now even if the one on lower trims isn’t as customizable as the one on higher trims. Add to that the 12.3-inch touchscreen on most trims, and we think some customers will have stars in their eyes when they first see it in person. Unlike what we’re seeing in the luxury space—with screens for the front passenger and now the rear, too—you’ll actually use this digital display space on a regular basis. Considering the three-row Telluride was MotorTrend‘s 2020 SUV of the Year, it’s easy to see Kia has made great strides beyond simply being a brand with features-per-dollar value and a long warranty. But to offer all this tech and space for well less than $30,000 gives the Sportage a great start.

Because Comfortage Didn’t Have the Same Ring

Kia tells us an overtly sporty driving demeanor was never the goal when developing the 2023 Sportage. Instead, a more comfortable experience was a higher target for the American audience. The Sportage X-Pro we sampled drives well overall but won’t bring you the joy delivered by the Mazda CX-5 or even the outgoing Honda CR-V.

You’d best not be in a hurry, however. The 2023 Sportage may boast 6 extra horsepower than before from its 2.5-liter turbo-free I-4, but the eight-speed automatic and 187-hp engine are no match for the much more capacious SUV’s slight weight gains and bumps in fuel economy. Bottom line: The 2023 Kia Sportage can execute passing maneuvers no problem, but you’ll simply have to plan ahead a bit more than in the segment leaders and listen to the engine a little bit longer.

Our time in the non-hybrid 2023 Sportage was limited to the fancy and off-road-ready (ish) X-Pro Prestige model, which wears BFGoodrich Trail-Terrain tires that offer capability for those who may venture off road and a projection of strength and capability for those who don’t. In fact, Kia says the X-Pro’s exclusive drive modes were developed with these tires in mind. Like all 2023 Sportages with AWD, the X-Pro has 8.3 inches of ground clearance, which is less than the Subaru Forester (8.7 or 9.2 inches depending on model) and the RAV4 (8.4 to 8.6 inches). So it won’t win bragging rights with the off-roader crossover crowd, but our first experience off the beaten path suggests it should do just fine for those who’ll venture off-road. And for those who don’t: How about those raised roof rails and exclusive two-tone paint options?

Of course, the whole point of vehicles like the Kia Sportage X-Pro, Subaru Forester Wilderness, and Toyota RAV4 TRD Off-Road is just enough capability to provide peace of mind with daily drivability lacking on more focused SUVs. To that end, the performance of the 2023 Kia Sportage X-Pro gets the job done, with a ride that isn’t punishing and a general maneuverability that’s more family SUV than four-door Jeep Wrangler or Ford Bronco. That said, with the Sportage, we do wonder whether the steering will feel a tad more precise with more street-oriented tires.

So the Sportage X-Pro is a solid if not class-leading driver. The tech and cabin spaciousness are almost superb enough to make us forget about its shortcomings. Materials are a mix of soft-touch and hard surfaces appropriate for the segment, and the only big miss is the same basic volume and temperature controls as we criticized in the electric Kia EV6 SUV. Press an on-screen button, and the two knobs switch functions from temperature to either the sound system (volume and tuning) or map zooming if navigation is active on the massive 12.3-inch touchscreen. It’s an unnecessary complication that could be avoided with a less futuristic but more functional design. Another issue here: You’ll learn to be dainty with the driver-side knob, otherwise the on-screen defroster may turn on if your finger touches it by mistake.

Other than that, the interior is a winner, with a sizable cargo area that features controls to fold down the 60/40 rear seats and, in the rear seat, a clever USB solution. As we’ve seen in other Kias, the USB outlets are located halfway up the backs of the front seats, which means the days of plugging in from an outlet right above the floor are over. The cupholders are also notable enough to mention because of their ability to handle cups as well as larger objects without requiring the removal of a separate trim piece that’ll get in the way later—press a button and the spring-loaded cupholder edges disappear.

We like the Kia 2023 Sportage, which is why we hate to mention fuel economy and driving range. Yes, the new Kia improves on its predecessor in terms of the former, but not the latter. And the 2023 Sportage’s efficiency trails the rest of the segment, too. Just like the 2017 Sportage I spent a year with during our long-term test, it’s not a good look to feel slower than a few others in the segment and simultaneously have inferior fuel economy. For the non-hybrid Sportage, EPA-rated fuel economy comes to 25/32 mpg city/highway with FWD and 23/28 with AWD. Combined city/highway driving range is only around 358 miles with AWD and just better than 400 with FWD, meaning you’ll visit the gas station more often than you might with competitors that combine slightly better fuel economy with a decent-sized gas tank.

Considering the improvements in tech and spaciousness, this may not be a deal breaker for most, but it’s worth noting. Unless you must have an X-Line or X-Pro model, we suggest considering the 2023 Kia Sportage Hybrids for an overall better experience; the price premium is only $900 to $1,300 more than the non-hybrid, depending on trim, and it’s worth the investment for added acceleration, range, and quietness if you can swing it.

As of this writing, the 2023 Kia Sportage hasn’t been safety tested. This segment is full of safe options, and we look forward to seeing whether the Kia does in fact receive top marks from NHTSA and IIHS. The Hyundai Tucson performs great with the IIHS and is a 2022 Top Safety Pick+, but it only manages four stars (out of a possible five) from NHTSA. So we’ll be keeping an eye out.

The new 2023 Kia Sportage represents a meaningful upgrade compared to the outgoing model. In a more normal, shortage-free new car market where inventory isn’t the most important factor, the redesigned SUV could chip away at the Toyota RAV4’s sales dominance thanks to its superior tech, spaciousness, and features-per-dollar value—though we wish a power liftgate and adaptive cruise control were available for less than $30,000.

However, the standard powerplant doesn’t deliver anything you can’t get elsewhere in terms of acceleration or efficiency, much like the last-gen model. Despite that caveat, the 2023 Kia Sportage is otherwise a good step forward. Not every box is checked here, but the Sportage is hugely improved. Buyers who brave the wilds outside a Honda or Toyota dealership may find most of what they’re looking for here beyond just Kia’s great warranty coverage. And that’s more than we could say for the last Sportage.