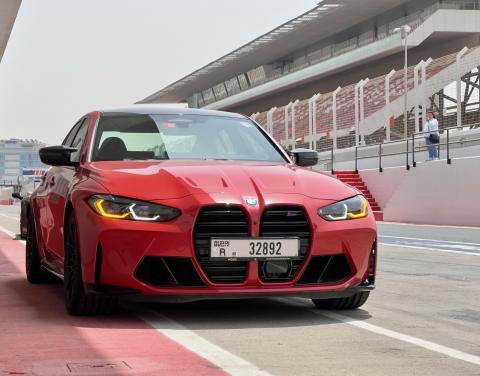 I was surprised at how brilliantly that front end tucks in and wants to turn. It is now in proper Porsche 911 territory.

BHPian Reesnat recently shared this with other enthusiasts.

Was in Dubai for a holiday and got to drive the G80 M3 on track at the Dubai Autodrome, thanks to the team at BMW India who helped facilitate it, was a great experience! Here are some of my impressions after the short stint on track with it: The looks – the grill does look better in person, I’ll say that for sure. Still, in bright colours, I can see how it may not be for everyone. For me personally, I’ve grown to really like the M4 in Dravit Grey. I was really impressed with how the M3 drove on the track. Coming from my M2C and some memories of driving the F80 M3, I expected the car to feel heavy and less willing than it did. From the very first corner, I was surprised at how brilliantly that front end tucks in and wants to turn, the front end of this generation is now in proper 911 territory. The chassis balance and handling is a significant step forward from the earlier generation, no two ways about that. It’s a lot more sophisticated and well mannered than before, and if needed also a hooligan if let loose, this is the main trait of an M car and that is still very much intact.

The ZF gearbox has been tuned very well, it does what it’s supposed to, quick and smooth. BUT, it just doesn’t have the ‘smack’ of the M-DCT in the previous generation which is so satisfying and fun. On the track, that very smack can probably unsettle your car mid-corner with how aggressive it can be, so in some ways, the ZF may be better from a performance standpoint for track days. Still, the joy of that DCT was sorely missed for me, for a car this aggressive, that would have been the perfect match.

To summarise, I was super impressed and think these are a big step forward and feel like proper sports cars and have really closed the gap to the 911, and not just the base 911, but the Carrera S.