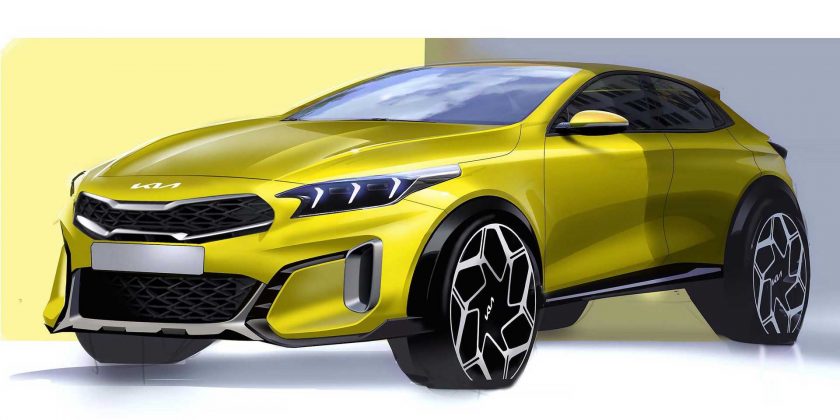 When is a Kia compact crossover not a Sportage? When it’s the XCeed. Truthfully, it’s more of a high-riding version of the hatch and is significantly shorter than the Sportage. It has been around since mid-2019 and will go through a mid-cycle facelift on Monday when it’ll debut with a GT-Line trim. The sporty-looking specification had been missing from the lineup and should help the XCeed reinforce its status as the best-selling Ceed of them all.

The adjacent design sketches show the 2023 XCeed with Kia’s revamped badge and the dotted taillight pattern we saw on the Ceed GT / GT-Line last year. It’ll also inherit the boomerang-shaped LED daytime running lights from the rest of the Ceed derivatives. The separate fog lights will be moved into the main headlights while the bumper will get a faux vertical air intake and a curved glossy black trim piece.

Kia aims to sell the 2023 XCeed exclusively with mild-hybrid and plug-in hybrid powertrains. By being offered only with electrified engines, chances are the car’s starting price will jump a bit. We’ll remind you the PHEV combines a 1.6-liter gasoline engine with a dual-clutch, six-speed automatic transmission, a 44.5-kilowatt electric motor, and an 8.9-kWh lithium-ion battery pack good for 37 miles (60 kilometers) of electric range. The total system output is 139 horsepower and 195 pound-feet (265 Newton-meters) of torque.

Going for a PHEV means sacrificing some of the practicality as the extra hardware eats into the amount of available cargo room. The electrified crossover’s volume goes down from 426 liters (15 cubic feet) to 291 liters (10.2 cubic feet).

Should you need all-wheel drive, you’ll have to step up to the new Sportage since the XCeed is offered only with a FWD layout like the rest of the Ceed range and the smaller Stonic crossover. A fully fledged GT seems highly unlikely since the sporty treatment has only been offered on the Ceed and Proceed.

Updates to the safety systems and infotainment are also being promised, but we’ll learn more about the revised crossover on July 18.