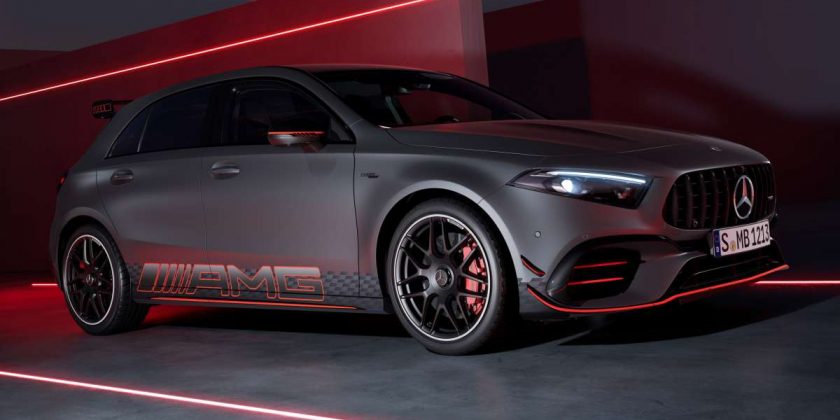 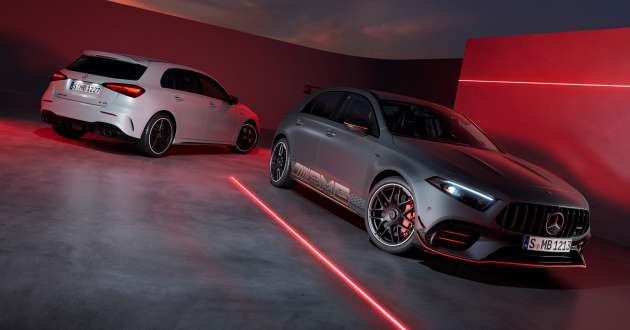 In addition to the regular variants of the facelifted A-Class, Mercedes-Benz also brought out AMG versions aimed at performance-hungry individuals. As before, there are two flavours to choose from, including the A35 4Matic and A45S 4Matic+, with the former available in hatchback (W177) and sedan (V177) body styles, while the latter is strictly a hatchback.

As for the A35 4Matic, it too uses a 2.0 litre turbocharged four-cylinder engine, although it’s not the M139 but the M260. Like the non-AMG variants with the M260, there’s now a 48-volt mild hybrid system that integrates a belt-driven starter-generator (RSG). This provides up to 14 PS (13 hp or 10 kW) of assistance when setting off or to enable improved coasting for better efficiency.

Despite the presence of the RSG, outputs remain unchanged from before at 306 PS (302 hp) and 400 Nm. One notable change is the transmission, with the previous seven-speed AMG Speedshift 7G dual-clutch transmission replaced with an eight-speed unit instead, joined by a 4Matic all-wheel drive system. Performance remains the same, with a 0-100 km/h time of 4.7 seconds and top speed of 250 km/h.

In terms of visual changes, the AMG cars get the same revisions as the standard A-Class, including tweaked headlamps with a new LED daytime running light signature, a reprofiled front grille and new graphics for the taillights.

Both the A35 and A45 feature a Panamericana front grille to make them stand out, and the round badge ahead of the bonnet now bears the AMG emblem instead of the traditional Mercedes-Benz star with a laureal wreath.

The bumpers mimic those of the AMG Line for non-AMG variants, but there are specific touches to make them stand out. For instance, the rear bumper integrates a diffuser and the company’s signature dual (A35) or quad (A45) oval-shaped exhaust tips. The Aerodynamics Package adds flics, bumper inserts and a front splitter for a more menacing look.

Moving inside, you’ll an AMG Performance steering wheel and seats, the latter now available in a sage grey colour. The latest MBUX system also comes with AMG-specific displays and abandons the touchpad mounted on the centre console (as per the A-Class facelift), while the interior is trimmed accordingly to match the higher levels of performance on offer.

For the market launch of the new AMG A-Class models, the A45 can be ordered as a special Street Style Edition, which includes a mountain grey magno exterior paint finish, edition-specific foiling with colour gradient in black/anthracite matt and colour accents in fluorescent orange. This is accompanied by newly designed 19-inch wheels in matte black and bright red brake calipers.

Inside, the Street Style Edition’s seats are in black Microcut microfibre with orange accents, including a label on the headrests. The steering wheel also gets trimmed in leather/Microcut with contrasting orange stitching, and the AMG trim elements in aluminium have the same pattern to match the exterior foiling. Also included is the AMG Aerodynamics Package, AMG Night Package I and II and the standalone AMG fuel filler cap.