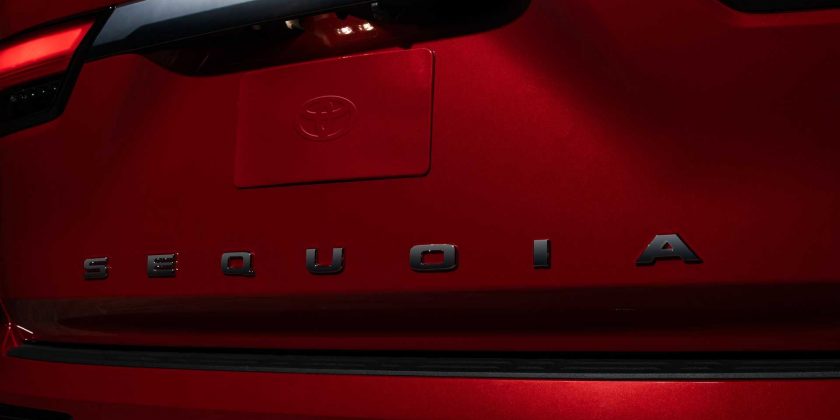 The third-generation Toyota Sequoia will debut even sooner than expected. The unveiling of the big SUV will be Thursday, January 25, at 9:30 PM EST. The brand also launched a promo site for the model and released a new teaser image of the model.

The photo shows the lower portion of the Sequoia’s hatchback and a little of the rear bumper. The only notable bits of the design that are visible are the metallic finish for the handle and horizontally oriented taillights. Also, there is “SEQUOIA” lettering.

The earlier teaser showed the vehicle’s rear pillar. It has sharp lines. The edge of the side glass has an upturned kink, and there’s a little bit of a resemblance to the new Land Cruiser.

Toyota’s promo site for the Sequoia has three boxes with “Coming Soon” in them, which suggests at least a trio of additional teasers coming before the SUV debuts.

Toyota isn’t yet showing the front of the new Sequoia but expect it to be similar to the new Tundra. If so, then the SUV would have a large grille and Y-shaped headlights.

Inside, the Sequoia might also get the Tundra’s upgraded infotainment system that comes standard with an 8.0-inch display but is available with a 14.0-inch screen on higher-level trims. There would be three rows of seating.

We also anticipate the Sequoia to share engines with the Tundra. If so, the base engine would be a twin-turbocharged 3.5-liter V6 with 389 horsepower (290 kilowatts) and 479 pound-feet (649 newton-meters). Customers could upgrade to the i-Force Max hybrid powertrain making 437 hp (326 kW) and 583 lb-ft (790 Nm). Rear- and four-wheel-drive layouts would be available.

Following the debut on January 25, look for the new Sequoia to be on sale at dealers before the end of the year.