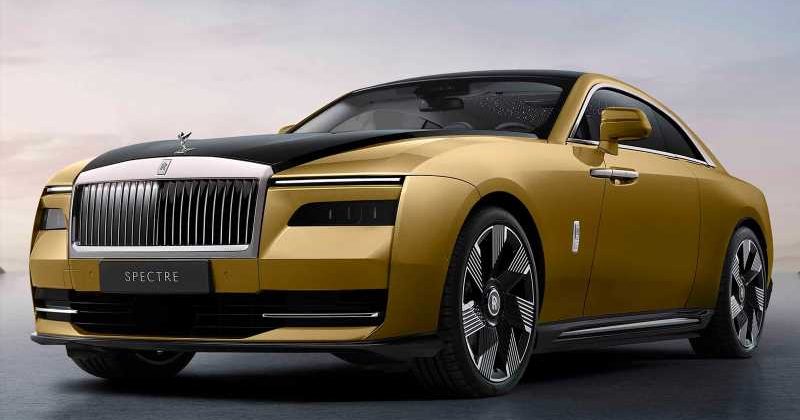 The 2024 Rolls-Royce Spectre Coupe is the ultra-luxury automaker’s first new production coupe in a few years, billed as a spiritual successor to the old Phantom Coupe, as well as the brand’s first-ever all-electric production model. Building on the all-aluminum “Architecture of Luxury” shared with the existing Phantom, Cullinan and Ghost models, the new Spectre design previews “Rolls-Royce 3.0” as the company prepares for an all-electric portfolio by 2030.

Rolls claims the Spectre is over 120 years in the making, with company cofounder Hon. Charles Stewart Rolls praising the “noiseless, clean” attributes of an electric vehicle way back in 1900: “The electric car is perfectly noiseless and clean. There is no smell or vibration. They should become very useful when fixed charging stations can be arranged.” It may have taken over a century, but we might be just around the corner from finally accomplishing the necessary infrastructure to accomplish such a luxurious prophecy of motoring.

Company engineers certainly had the momentum of the industry and the attributes of electric vehicles in mind when they pre-engineered the brand’s new scalable aluminum platform to be adaptable to combustion and electric powertrains when it was introduced back in 2018. The incorporation of batteries into the Spectre’s chassis improve the platform’s stiffness by 30 percent, which also doubles as 700 kg, or 1,540 pounds, of sound deadening.

The planar suspension system is capable of decoupling the anti-roll bars which allows each wheel to move independently, reducing the amount of body rocking when just one side of the car hits a bump, as well as vibrations over messy roads. The system recouples and the dampers stiffen in cornering, where a four-wheel steering system uses 18 sensors to ensure stability.

Taking ownership of what could easily be leveraged as a complaint, Rolls says the new Spectre was directly inspired by “modern yacht concepts” and nautical design, as well as modernist sculpture, haute couture, tailoring, and contemporary art. The new look introduces the widest grille ever fitted to a Rolls, which is a little funny considering it doesn’t need one. The new grille now features angled vanes that guide air around the nose of the boat, er, car.

The Spirit of Ecstasy figurine has also been significantly overhauled with over 830 combined hours of reworking to be more aerodynamic, which apparently contributes to an impressive overall drag coefficient of 0.25 for the Spectre (a Tesla Model 3’s is 0.23 cd).

The new sharp and thin daytime running lights are meant to highlight the ridiculous width of the Spectre while adopting the split headlight look of the rest of the current lineup, and that new wide grille also lights up at night now. Down the side, the Spectre is broken down into three main character lines; the lower “waft” line is directly inspired by a yacht silhouette, the shoulder line defines the flat, broad sides of the car, and the fastback roofline helps communicate speed and aerodynamic efficiency.

The rear fender that houses the taillight is the largest single body panel ever fitted to a production Rolls-Royce, stretching from the lower A-pillar all the way back to the trunk, and the taillight itself is in a clear housing so as not to clash with the infinite availability of paint swatches. It’s also the first modern Rolls to be fitted with whopping 23-inch wheels.

Taking inspiration from the company’s fancy night sky roof light effect, the new Spectre is now available with Starlight Doors that incorporate more than 7,900 tiny embedded lights, which matches the “Illuminated Fascia” of 5,500 “stars” illuminated on the passenger dashboard. The new all-digital dials can now be programmed to color-match the custom interior, as well. The new Spectre also shares the company’s Spirit software architecture now with more functionality and quicker responsiveness.

The company has put the Spirit through more than 1.55 million miles of simulated and real-world testing so far in places like Arjeplog, Sweden in the Arctic Circle at -40 degrees Fahrenheit; Southern Africa at 130 degrees; and also where most people will actually drive them, like the French Riviera.

Final power figures are “still being refined,” but the company expects at least 430 kW of power, or about 576 horsepower, more than 660 lb-ft of torque, and up to 320 miles of range on the European WLTP testing cycle, with a zero to 60 mph time estimated around 4.4 seconds. Those figures may change or improve once it’s actually shipping late next year; it’s said to be priced between the Cullinan, which starts around $340,000, and the Phantom, which starts around $460,000.