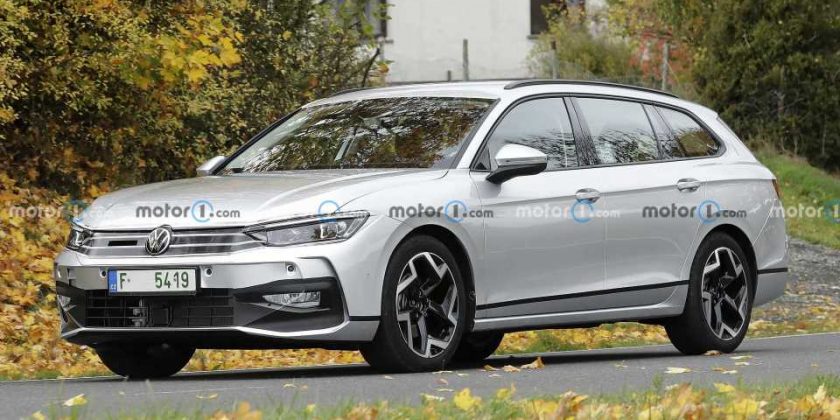 Volkswagen has certainly mastered the art of disguise. Whereas a full-body camouflage wrap attracts attention, stickers mimicking lights, grilles, and other body panels are very convincing to the average person. Fortunately, our spy photographers are anything but average.

So when this silver VW Passat wagon came into view, the cameras started clicking. This isn’t the first time we’ve seen test vehicles in public; in fact, we just caught a plug-in hybrid model a few days ago. This prototype appears to be pure internal combustion, as there’s no charging port on the fender. Fortunately for us, this vehicle was traveling slowly and our photographer was able to snap clear, high-resolution shots that let us see body lines behind all the fake stickers on the front end.

It’s easy to see the traditional VW grille of the current Passat is gone. A much smaller opening not unlike the ID.4 exists behind that decal, and the headlights are also thinner than what we see here. Moving our gaze further down, it’s very easy to see the smiling shape of the lower fascia through the fake corner vent decals. It’s possible some trim pieces are absent from this test vehicle but these images show the new Passat’s face with surprising clarity… once you look past the disguise, anyway. The same trickery takes place at the back, but again, the fake black decal doesn’t hide the new bumper. There are smaller taillights, too.

Viewed from the side, it appears the new Passat wagon is a bit wider, offering more space inside for occupants. Regarding the interior, spy photos have shown a digital interior with a tablet-style infotainment screen also similar to the ID.4. Unlike the electric crossover, this Passat uses either a gasoline or diesel engine for power but this will almost certainly be the last of its kind.

Test vehicles have been sighted in public for nearly a year at this point, so a debut shouldn’t be too far off. Our sources say Volkswagen wants to launch the car in the second half of 2023 or 2024, which would likely make this a 2024 model. In the meantime, jump into the latest Rambling About Cars podcast for more news and witty banter in the automotive world.