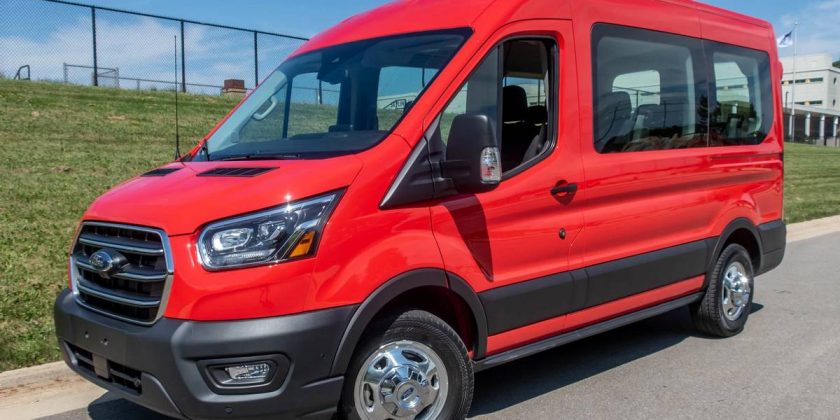 If you have the typical American family, chances are there are two kids involved. But some of you out there have more than two kids, and some of you out there have a lot more than two. For people with big families, a seven- or eight-occupant vehicle is a must — but options on how to move that family around are limited. Many end up taking two cars or are forced to buy the biggest SUV or minivan they can get their hands on. Ford says that there’s an alternative, however: the 2020 Ford Transit.

Related: Do You Really Need a Full-Size Luxury SUV? How About a Conversion Van Instead?

Yes, the Transit is a commercial van, but it’s also available in a passenger van version with seating from eight up to a maximum of 15 people. It’s based on a European design and powered by a choice of two V-6 engines here in the U.S. (the diesel has been dropped for 2020), and it comes in three different lengths, three different heights and even with optional all-wheel drive. In other words, the Transit does things that big SUVs generally can do at a price most big SUVs can’t match.

I spent a week with a bright Race Red 2020 Ford Transit XL with the medium-roof, short-length, 10-seat configuration to see if it was a suitable, cost-effective alternative to a big SUV for families with enough members to be their own basketball team. Here’s what I discovered.

5 Ways the Transit Is Better Than a Big SUV

1. It Fits Scads of People in Space and Comfort

A Transit comes in three roof heights and three lengths. Mine was the medium-roof, short-wheelbase model, which is sufficient to actually stand upright if you’re less than 6 feet tall. There’s an unbelievable amount of space inside, far more than you’d find in any SUV, with room in my test model for 10 people in four rows of seats. The seats themselves are narrower than you’d find in a typical SUV, which is how they squeeze so many of them into a footprint that isn’t any bigger than a big three-row SUV. Most of the seats in the three rows behind the front occupants have the same amount of room, so being relegated to the back row isn’t the penalty box it is in a traditional SUV.

The Transit has nearly 16 inches more headroom than a Ford Expedition Max in any of the back rows. New for 2020 is an available power sliding side door on the passenger side, meaning it’s just as easy to open and close as a minivan now. The only downside is that the big door is only present on the curb side of the passenger Transit, as dual sliding rear doors are not an option (though dual rear hinged doors are).

2. It’s Easier to Park Than a Big SUV

A short-length, medium-roof Transit is actually 4 inches shorter than an Expedition Max and only about an inch and a half wider, but it’s arranged very differently inside. As a result, it fits into spaces you’d think it wouldn’t, including tight parking lots, parallel parking spots on the street, driveways, cul-de-sacs, etc. The rearview camera is helpful in backing up, but it’s still not quite the 360-degree system offered on many upscale SUVs. The sliding door also helps in this regard, as kids can get in and out without risking striking the vehicle next to them, just like in a minivan.

The Transit has a surprisingly tight turning circle, which makes it highly maneuverable in urban environments; it was originally designed to be piloted through narrow European city streets, after all. Despite its heft and commercial van origins, it’s quite nimble and handles easily, no better or worse than any other big SUV. It weaves through traffic with ease, and the base 275-horsepower, 3.5-liter V-6 engine provides plenty of power (a stronger 310-hp, twin-turbocharged EcoBoost V-6 is optional).

The Transit is easy to see out of due to the huge windows in every direction, except to the rear. The downside of being a big van is that a single-piece rear hatch would be enormous and too heavy, so it’s split into two vertical doors with a huge line down the middle. Your side mirrors will be more useful than the rearview mirror. If ever there was a perfect application for a rear camera mirror, it’d be here.

The ability to stand up in the driver’s seat (when parked, of course) and walk back into the rear of the van is a welcome feature. If it’s raining and you need to attend to something in the back, you never have to get out of the van in order to do it. Hop in through the big side door, buckle all the kids in and take your seat without ever leaving the vehicle. If you don’t need all the seats, they’re removable (with some effort), leaving you a cavernous space in which you can relax — so why not take it camping? Nothing’s worse than spending a night in a rainy tent, but with the Transit, there’s no need: Just relocate into the cabin’s cozy confines.

5. It’s Cheaper Than a Comparable SUV

Getting a body-on-frame eight-person SUV is still possible, but you’ll pay through the nose for it. The most basic rear-wheel-drive 2021 Chevrolet Tahoe LS starts at $50,295 (all prices include destination), while the least expensive Ford Expedition is $54,505. The least expensive passenger version of the Transit is $41,875 with eight- or 10-seat configurations at no price difference. Of course, that model is a super-bare-bones edition with few options (or even standard features). The as-tested price for my very well-equipped 2020 Transit-150 medium-roof XL AWD was $54,067 and included the high-spec multimedia system, front and rear cameras, parking sensors all around, blind spot detection, forged aluminum wheels, power running boards, bi-xenon headlights and seating for 10.

This is not how I’d choose a Transit for family duty, however. I’d opt for a medium-roof, long-wheelbase XL AWD so I can spec the power sliding door. The total cost for my own bright-red version equipped like that isn’t much more, however: just $54,615.

The Transit is a heavy beast, a couple of hundred pounds more than a comparable aluminum-bodied Expedition Max: 6,040 pounds for the Transit-150 medium-roof, short-wheelbase AWD versus 5,794 for an Expedition Max 4×4. It also isn’t nearly as aerodynamic as a sleeker SUV, and that 275-hp V-6 is pushing the equivalent of a small house through the air. As a result, fuel economy suffers: It’s officially rated at a cringeworthy 14/19/16 mpg city/highway/combined for an AWD model, and my testing returned an average of 17.6 mpg combined for the week, which fits with the Transit’s official rating. An Expedition Max isn’t much better, rated at 16/21/18 mpg, but EcoBoost V-6 engines aren’t known for meeting their ratings in real-world situations, so your mileage may vary.

Still, more efficient offerings will soon be available in eight-seat SUVs — the newest 2021 Chevrolet Tahoe with a Duramax turbo-diesel engine is expected to get in the 25-30-mpg highway range, though it’s likely to be very expensive.

2. It Doesn’t Fit in Car Washes (or Garages)

The lowest Transit is 82.3 inches high, whereas the Expedition Max 4×4 comes in at 76.2 inches. Those extra inches make it tough for a Transit to fit in a car wash, or a home garage or some public parking garages, for that matter. My medium-roof model was 98.8 inches tall, and the tallest Transit van can go up to 108.6 inches, or more than 9 feet tall. That makes automatic car washes impossible and even might make it challenging for coin-op car washes, as well. Better put that large family to work with a bucket and some sponges (and maybe a mop on an extended handle).

3. The Ride Is Worse

There’s no cushy air suspension in the Transit, no magnetic shocks, no independent rear suspension. It’s a commercial van underneath, with a solid rear axle that you’ll feel when it comes to driving over road imperfections in corners. It’s a robust setup, but it’s primary goal is surviving heavy-duty use, not coddling passengers in cloudlike comfort. The more people you put in it, the smoother the ride becomes as the weight goes up and the rear suspension is loaded, but it’s going to be a bumpy ride if you only have yourself or a few others in it.

Overall, the Transit presents a very interesting, cost-effective alternative for big families who often use two vehicles to get the whole brood somewhere they need to be. The space, value and utility of the truck cannot be denied, and when matched up against the latest crop of high-bucks SUVs, it’s worth considering.