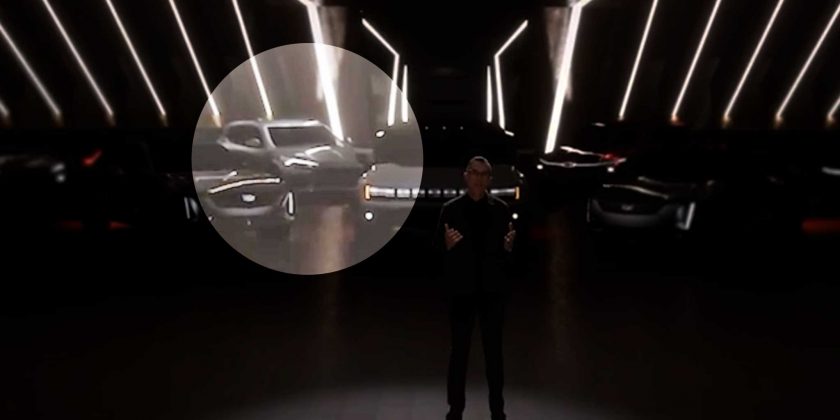 In announcing a rash of new electric vehicles across its portfolio of brands, General Motors let slip an image of what sure appears to be a C8 Corvette-inspired SUV. This isn’t just a wild assumption; during a virtual presentation of GM’s EV plans for Buick, Chevrolet, Cadillac, and GMC, as well as its Hummer sub-brand, vice president of global design Michael Simcoe noted how electric full-size pickups, compact crossovers, and even “high-performance vehicles” are headed for Chevy showrooms.

Pair up the very Corvette-like SUV pictured with the promise of an inbound high-performance Chevy EV, and it’s not so great a leap. Starting on looks alone, whatever that SUV is that’s parked behind a Cadillac and the new GMC Hummer EV sure looks like it was cooked in the same pot as the current Corvette. It wears thin, barely boomeranged headlights over a trio of angular lower intakes; nestled between those is a low, pointy hood with a center strake. There is no upper grille element visible, and these days, the only vehicle in the (North American) GM empire without an upper grille is, you guessed it, the Corvette.

Beyond its face, the body is chamfered and squared-off, seemingly disqualifying it from being a Buick (all of which are fairly round and doughy things these days), while its lack of vertical LEDs ensures it isn’t a Cadillac, several of which are strewn about the presentation stage. We see precious few indicators that this could be a GMC, either. So, it’s an electric Chevy SUV, but clearly, not the upcoming 2022 Bolt EUV, which has totally different headlights. Assuming Mr. Simcoe’s comments about an imminent electric high-performance Chevy weren’t a reference to an actual electric Corvette sports car, then they’re likely a reference to this unnamed, mystery SUV.

We reached out to Chevrolet for comment, and for more on whether the Corvette name has a future at the automaker beyond sports cars, and received a canned response. The automaker reiterated that it expects four new electrics to follow the newest Bolt and the Bolt EUV electric SUV, including a pickup truck and a compact crossover, but didn’t include a direct response to our Corvette inquiry.

So, will the high-performance electric Chevy vehicle mentioned by the Vice President of Design be a Corvette SUV (or at least a Corvette-inspired one)? At this point, there is a non-zero chance for the first two options. It’d have precedence, too. Just look at how Ford appropriated the Mustang name and styling for its new Mach-E electric SUV, leveraging the pony car’s celebrity and name recognition to launch its first serious long-range, performance EV.