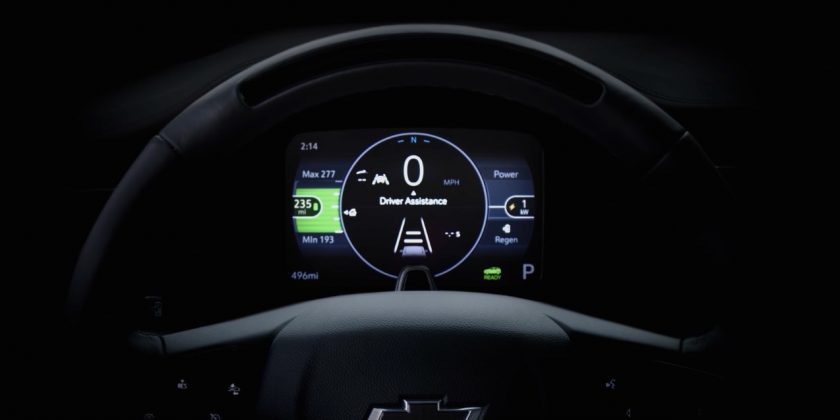 GM provided another sneak peek of the 2022 Chevrolet Bolt EUV, an electric crossover that will finally be shown in February alongside the refreshed original Chevrolet Bolt electric vehicle. Previous looks were released in August and December.

The 2022 Chevrolet Bolt EUV (an acronym for “Electric Utility Vehicle”) is taller and larger than the 2021 Bolt, with a wheelbase stretched by three inches and an overall length increase of five to six inches. It has been designed, of course, to look more like an SUV than that tall hatchback. The EUV was teased again during a keynote speech by GM chairman and CEO Mary Barra at the virtual CES 2021 event with a quick look at its steering wheel and some instrument panel graphics.

Interestingly, the driver display’s crisp, green-themed readout clearly shows a remaining range of 235 miles with the battery pack at 80 percent capacity. The regular Bolt offers a maximum EPA-rated range of 259 miles. While our mathematic abilities are admittedly limited (hey, we’re writers), we’ve loosely calculated the bow-tie-badged electric SUV could be capable of topping 290 miles on a full charge.

Also notable is that the display also shows GM’s Super Cruise hands-free highway automated driving system is active; it’s a technology that has until now only been available on Cadillacs. The Bolt EUV will be the first Chevrolet to get Super Cruise, but not the last. The latest version of Super Cruise can make hands-free lane changes on compatible highways by tapping the turn signal.

The interior of the Bolt EUV will benefit from the improvements made to the refreshed Bolt, which will feature nicer materials and new seats that should be more comfortable. Additional equipment includes a sunroof, an improved infotainment system, and a push-button gear selector. Both Bolts will go into production and reach dealerships this summer.

The Bolt family rides on the BEV2 architecture. (Our artist’s illustration of what the EUV might look like is shown below.) This is distinct from the newer BEV3 platform/Ultium battery system that is underpinning a raft of new EVs GM has on the way, and which the company says will offer up to 450 miles on a single charge. GM is investing $27 billion to develop electric and autonomous vehicles with plans to offer 30 all-electric vehicles globally by the end of 2025.

Finally, GM is continuing its efforts to redefine its corporate image with a new ad campaign called “Everybody In” that emphasizes a commitment to mass production of attainable electric vehicles. “We’re updating our corporate identity,” Deborah Wahl, global chief marketing officer, said in a speech for CES this week. Under Wahl’s guidance, GM launched a rebranded website on Monday and last week GM showed a new, more modern logo with GM in lowercase letters and an underscore below the ‘m’ to create the shape of an electrical plug in the negative space.