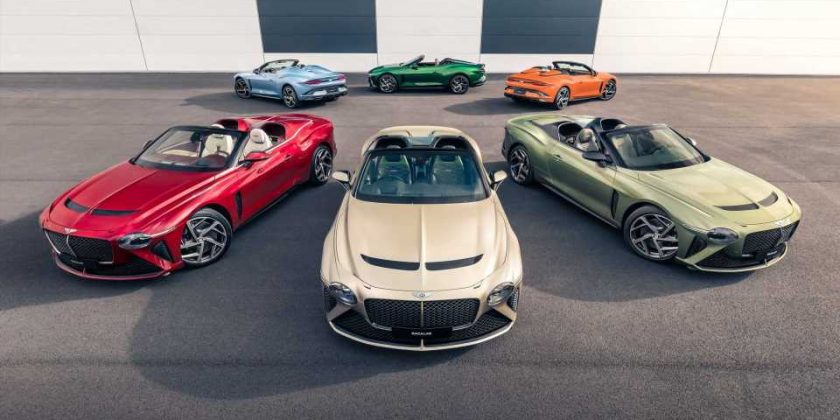 Unveiled more than two years ago, the Bentley Bacalar is “the ultimate expression of two-seat, open-air luxury.” Designed by Mulliner, the oldest coachbuilder in the world, the model marked the return of the studio to coachbuilding. Mulliner is now nearing the completion of the Bacalar’s production, which should allow the division to focus on new projects, which will be revealed soon.

Mulliner will assemble a total of 12 cars, each in a unique color designed by its customer. Eight cars have already been delivered to their new owners and the final four examples are currently in the final stages of assembly at Mulliner’s workshop in Crewe. Each car takes about six months to complete, from the mechanical production to the “long and incredibly detailed process to craft each Bacalar according to its owner’s wishes.”

To highlight the countless customization options, Bentley showcases the Bacalar in several different colors, not seen on the open-top grand tourer before. The automaker also reminds us that Bacalar attended this year’s Goodwood Festival of Speed, during which it was handed over to its new owner by Adrian Hallmark, Bentley Chairman and CEO. This particular car was finished in Sunset Orange color with customized 22-inch wheels.

“Designing a Bacalar is an exercise in imagination, with the material, color and finish of practically every interior and exterior surface being bespoke,” Maria Mulder, Head of Color, Materials and Finishes at Bentley, comment. “Regardless of your personal style, whether it be to specifying your Bacalar with a bold Yellow Flame exterior paint synthesized with rice husk ash, or a more subtle Moss Green that reflects Bentley’s heritage, developing your own artisan piping, or co-create a unique fabric blend, the Bacalar has provided all of these opportunities.”

The engine under the hood deserves an equal amount of attention and Bentley builds the 6.0-liter W12 by hand. In this latest evolution, the mill generates 650 horsepower (485 kilowatts) and 667 pound-feet (900 Newton-meters) of torque. Compared to the first Bentley W12 in 2003, the latest version, which was introduced in the Bentayga SUV in 2016, has an increased power by up to 27 percent, torque by 38 percent, and reduced emissions by 28 percent.