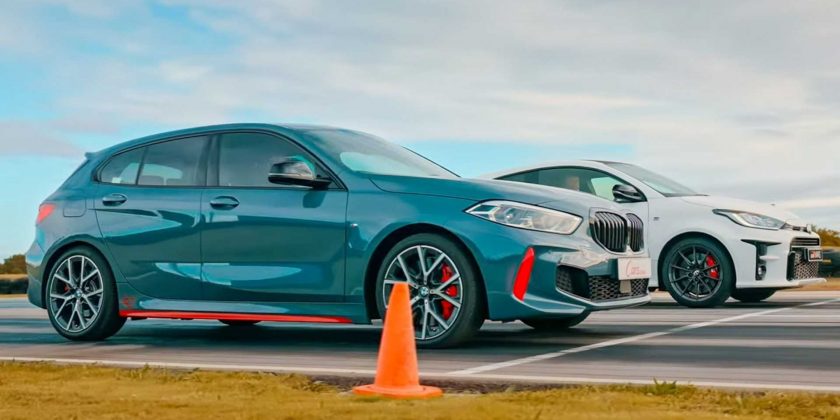 Hatchbacks don’t sell like they used to, especially in the US, but there is still ample choice out there for those wanting fun-to-drive practicality. Toyota wowed with its GR Yaris – a purpose-built hot hatch with all-wheel drive, a six-speed manual gearbox, and a turbo three-cylinder just to keep things quirky. BMW has the 128ti, pairing performance with luxury as the brand does, but how does it compare to the Toyota?

A new Cars.co.za YouTube video pits the two in a pair of head-to-head drag races to see which car is quicker through the quarter-mile. Neither vehicle has a clear advantage. The BMW’s turbocharged 2.0-liter four-cylinder delivers 241 horsepower (180 kilowatts) and 280 pound-feet (380 Newton-meters) of torque. The Toyota produces 264 hp (197 kW) and 265 lb-ft (360 Nm) of torque from its 1.6-liter turbo three-cylinder. The Toyota has all-wheel-drive, though it struggles to use all its power to overcome the car’s incredible grip.

The first race has the Toyota getting a good jump off the line over the BMW, which is slow to get going. However, the BMW closes that gap with each of the Toyota’s shifts, catching up and overtaking the Toyota just before the finish line, beating the Yaris by a bumper. The second race is a bit different, with the Yaris driver flat-shifting through the gears. The Yaris is able to get a superb launch off the line, and it’s able to keep the BMW at bay.

The final race saw the Toyota win by a car length, the BMW incapable of catching the Toyota before crossing the finish line. However, the 128ti was gaining on the GR Yaris, and with enough room, should have been able to overtake the Toyota for its second victory. But that didn’t happen, and there was only so much tarmac. Toyota’s three-door hot hatch is a remarkable little machine we won’t get to enjoy in the US anytime soon.