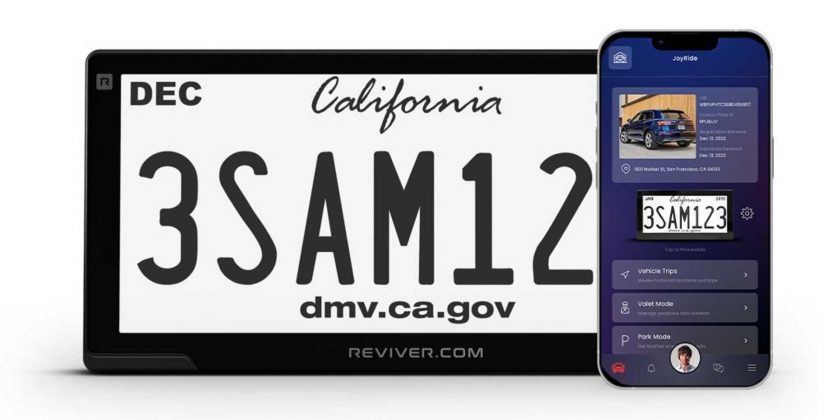 If you live in California, you’ll probably be happy to learn you are now legally allowed to put a digital license plate on your car. This becomes possible after the California Department of Motor Vehicles (DMV) approved the use of digital plates. This is the culmination of a process that started in California back in 2013, while digital plates have been allowed in limited numbers in the state since 2018.

This new step granted by the passage of the Motor Vehicle Digital Number Plates bill (AB-984) increases the number of vehicles allowed to use digital plates dramatically. Until now, only 0.5 percent of California’s vehicles were eligible (roughly 175,000 vehicles) but from now on, all 40 million vehicles registered for use in the state will be allowed to legally change their traditional registration plates with digital plates.

Tech firm Reviver is the only provider of digital plates for now and it says about 10,000 vehicles in California have already purchased digital plates. These early adopters were part of a pilot program with the California Highway Patrol evaluating the operational capability and functionality of three digital plates before the statewide implementation.

“Californians are known to be early adopters of emerging innovative technologies. We welcome new opportunities to automate and integrate as many parts of our lives as possible, enabling us to streamline mundane tasks and stay connected. Our cars are no exception,” Neville Boston, Reviver co-founder and Chief Strategy Officer, comments.

Reviver’s RPlate is much more than just a digital plate. The product enables vehicle owners to connect with their vehicles for visual personalization, vehicle location, and security services, including reporting a vehicle as stolen. There are two versions of the product – a battery-powered one with a subscription of $19.95 per month and a hard-wired one, which is currently only available to commercial businesses at $24.95 per month.

California is not the only state where Reviver’s digital license plates are legal for commercial fleet vehicles. Michigan, Arizona, and Texas also allow fleet vehicles to use digital plates and more than 10 US states are currently in various stages of adoption.

Source: Reviver via Car and Driver