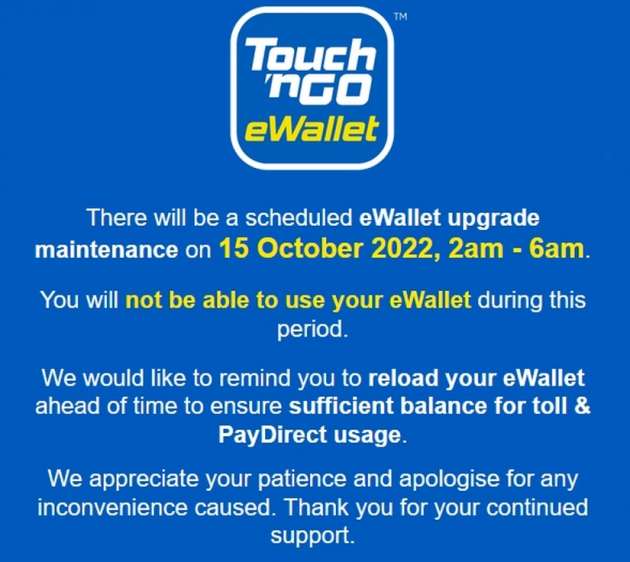 Touch ‘n Go (TnG) has announced that it will be performing an upgrade on its eWallet app on October 15, and this is scheduled to take place from 2am to 6am on the day. In an email to users, the company informed users that they will not be able to use their eWallet during the period.

Curiously, having said that the eWallet would not be usable during the four-hour maintenance period, the company then reminded users to reload their eWallet ahead of time to ensure a sufficient balance for toll and PayDirect usage.

This could mean that while users will have no direct access to the app during the upgrading work, the system will still be able to draw off the balance in an eWallet for transactions involving toll payments made via the PayDirect feature set on a TnG card. It’s worth noting that RFID isn’t mentioned in the statement, so if toll plazas continue to have their RFID lanes open at that point, then things are likely still working in the background.

This point is pertinent, because back in June, when the eWallet suffered a service interruption, it initially affected RFID and PayDirect, leaving users with the TnG card as the only means for making toll payments. Later in the day, users were then able to make toll, transit and parking payments using TnG cards and RFID, provided there was sufficient balance.

There’s always the fail-safe option, of course, ensuring that your physical TnG card has enough balance to get by. If you’re an NFC TnG card user and need to be using a route that doesn’t support PayDirect (such as the NKVE) in the wee hours of the morning on the day, best to load up on the balance from your eWallet before then.