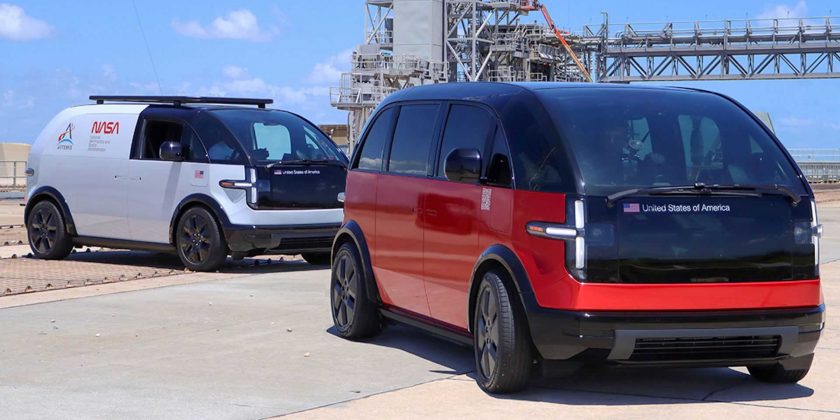 Two Instagram posts are giving us the first look at Canoo’s NASA transport vehicle in the real world. Technicians from NASA’s Exploration Ground Systems put on flight suits and gave the vans a test ride at the Kennedy Space Center.

The vehicles look nearly identical to the standard Canoo Lifestyle Vehicle, except for the NASA branding. NASA’s request for the model stated that there must be room for four fully-equipped astronauts, three additional crew, and a driver. In addition, there needed to be space for five equipment bags, four cooling units, and a pad transfer bag.

NASA demanded an emissions-free vehicle. However, the range only needs to be 50 miles since the drive out to the rocketship is only 9 miles. Canoo has until June 2023 to deliver all of the vehicles to the space agency.

The production-spec Canoo Lifestyle Vehicle is supposed to go on sale in late 2022 with prices starting at $34,750. It’s available in Base, Premium, Adventure, and Delivery trim levels. The most powerful version has 300 horsepower (224 kilowatts) and 332 pound-feet (450 Newton-meters) of torque. The expected maximum range is 250 miles (402 kilometers) from an 80-kilowatt-hour battery.

The Canoo contract is part of NASA’s Project Artemis that aims to return humans to the moon. SpaceX is handling the development of the lunar lander. The first test will be an uncrewed flight around the moon, and the second launch will have people on board, which will happen no later than May 2024. The third step will be an unmanned lander demonstration, and finally, we’ll send astronauts back to the lunar surface.

General Motors and Lockheed Martin are collaborating on the new lunar rover that will transport people across the moon. Renderings so far show it as an open vehicle with a roll hoop and a cargo bed. The vehicle will be capable of autonomous driving.