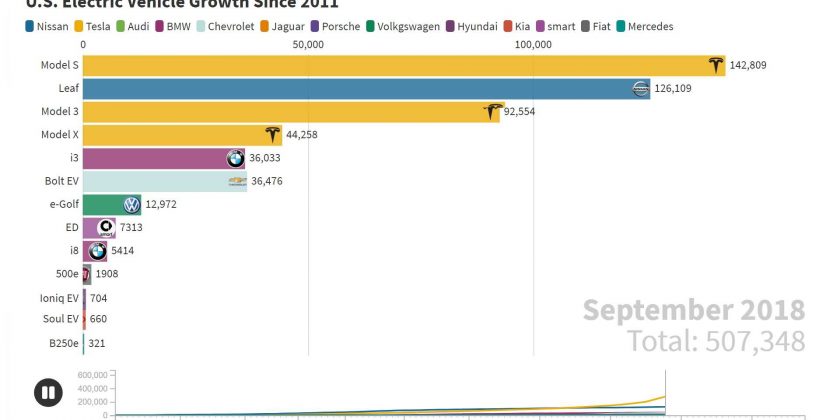 Did you know almost 1 million Americans bought an EV?

Nissan started to sell the Leaf in the US in December 2010. That’s the moment PartCatalog.com picked to develop the interesting interactive trend chart that is embedded in this article and also the video above, which you only get to pause and rewind for more details. Rich in information, the chart shows almost a million electric cars have been sold in the US from the end of 2010 until September 2011.

At this point, the chart starts to present a huge growth rate. Not because of new models that join it, such as the Hyundai Kona Electric, Audi e-tron, and Jaguar I-Pace, but because the Model 3 detaches itself from all other competitors. While they present almost constant sales year after year, the Model 3 presents an ascending line.

The explanation for that goes beyond Tesla’s popularity. Although that carmaker cannot sell its cars in all states, it probably has a much larger reach than models such as the Hyundai Kona Electric and other more affordable options.

Reach, price and attractiveness make the Model 3 a very successful machine in the EV market. It would probably go even better if Tesla had a larger production capacity, something that Giga Austin plans to fix.

The Model Y, one of the big bets Tesla has, did not have a lot of time to present its sales potential, but it seems to present much slower progress than the Model 3 did back in 2018. The good news is that electric mobility pressed the gas pedal in the last three years, as ironic as that may sound. And you already know how fast these machines gain speed.