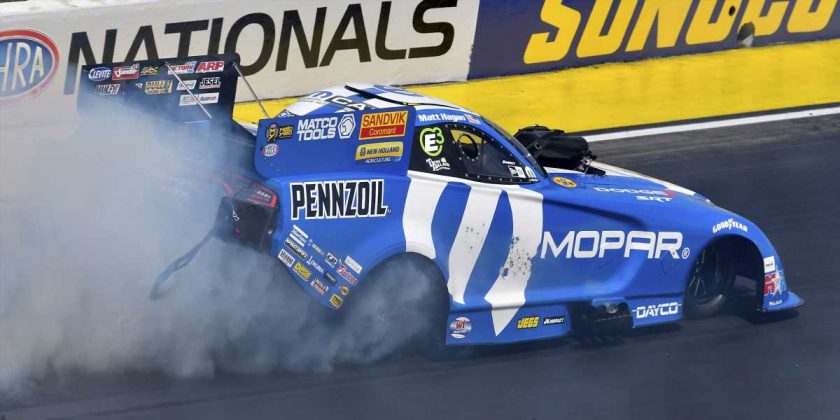 The NHRA championship would by No. 18 for DSR.

After this weekend, it’s go time back on the sponsor front as team owner Schumacher hopes to keep his powerhouse of seven NHRA nitro teams in the game for 2021. And, get this, Schumacher hopes to not only keep the band together, he’s talking expansion.

“It’s a unique year that has created tremendous challenges for all sports, not only drag racing, but all sports,” Schumacher told Autoweek. “To have a short season of only 11 races certainly has created challenges. And the teams that came out, they raced and did the very best that they possibly could.

“There’s that gorilla in the closet that wasn’t there—or couple of gorillas that weren’t there—but that was there choice. We just just went out and did what we’ve been doing, including the last few races of 2019.”

Meanwhile, DSR’s four Funny Car drivers—Matt Hagan, Tommy Johnson Jr., Jack Beckman and Ron Capps—haven’t missed a beat, and are sitting in the top four spots in the standings going into this weekend’s Dodge NHRA Finals Presented by Pennzoil at Las Vegas. Hagan leads, with Johnson 42 points back, Beckman 43 back and Capps 163 points off the lead.

Schumacher, meanwhile, likes his chances of adding to the DSR trophy case, even if he doesn’t profess to know all the possible outcomes and scenarios.

“The Funny Car championship comes down to really mathematically six cars that could win the championship in Las Vegas,” Schumacher said. “But so many cars would have to fall on the sword in qualifying or first-round eliminations that I see it as a really too big a challenge for anyone outside the top three, to be honest.

This week’s event features a special expanded point-and-a-half format, where each elimination round is worth 30 points. Tossing in the bonus points that are up for grabs in qualifying, and a perfect weekend of top qualifying and an event win would net 183 points.

DSR’s Funny Car teams are on an unprecedented roll, having won 13 consecutive races dating back to October, 2019. This past weekend, DSR won both the Top Fuel and Funny Car categories with Johnson winning in Funny Car and Tony Schumacher winning in Top Fuel.

It was the team’s first sweep of 2020 and 66th career weekend sweep in the two nitro classes.

A different kind of race continues for Don Schumacher after Sunday’s finale. Two of his four Funny Car drivers—Beckman and Johnson—don’t have major sponsorship for 2021. In Top Fuel, Schumacher expects to have Leah Pruett along with past Top Fuel champs Antron Brown and son Tony Schumacher back in the fold.

Brown was hoping to break off and start his own team in 2021, but those plans have been put on hold.

“Antron isn’t going out and forming his own team for next year,” Don Schumacher said. “202o has changed a lot of people’s future plans and goals and timing. That’s affected Antron.

“Antron and I are working toward him owning his own team, and hopefully that will transpire in a short period of time. Neither of us plan on it actually happening for 2021. That isn’t a reality at this point.”

As for the rest of the stable, Schumacher is hopeful.

The team was left without sponsorship for Beckman and Johnson when long-time sponsor Doug Chandler informed the team of his decision earlier this year to end his family’s sponsorship of the two cars at season’s end.

“The Chandler family has been with us for so many years and supported us so tremendously, beginning with Terry Chandler.” Don Schumacher said. “Sadly, Terry passed on (in 2017) and (her husband) Doug maintained the sponsorship. What can you say except thank you very, very much to the Chandler family, and they will always be in our hearts. They will always be part of the DSR family, today and in the future because of what they’ve done with us and for us all of these years. You don’t just forget people like that.”

Beckman, driver of the Infinite Hero Foundation Dodge Charger SRT Hellcat sponsored by Doug Chandler, said that he knows the clock is ticking for 2021.

“We don’t start until March, so that really gives me another month to find something,” Beckman told Autoweek. “Because of COVID, it’s been harder, not to look, but harder to get reciprocity from companies. A lot of folks don’t call back. They’ve cut their staffs back.”

Beckman remains optimistic, even in a pandemic. While his old job as an elevator technician is waiting for him back in California if he wants it, Beckman hopes he has a few more runs down the dragstrip left in him.

“A lot of people have said there’s been several nails driven into the NHRA coffin,” Beckman, 54, said. “Well, with this latest news of FOX extending the broadcasting deal through 2026, and (new title sponsor) Camping World coming on, thank God. It’s about time we got some good news for drag racing.

“There’s a lot of reasons to be optimistic right now. I don’t think the sport owes me, and it’s not like the sport would be worse without me being back out there, but I want to be back out there. If you gave me a choice of what I want to do for a living right now—one day I’d love to go into the broadcast booth— I’d like to drive for several more years.

“I don’t know what the future holds, but I’m not going to cry about it.”

Are you excited for the NHRA finale in Las Vegas? Pumped up for 2021 and to see what Camping World sponsorship brings to the table? Join in the NHRA discussion below in the comments section.