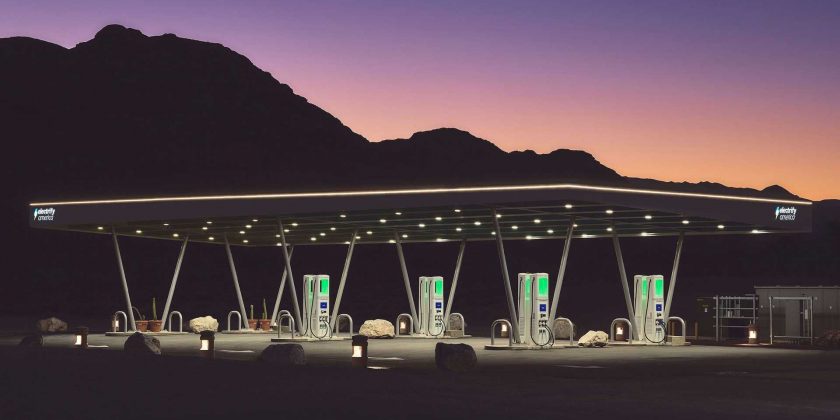 Electrify America today has announced they now have more than 500 DC Fast charge sites with over 2,200 ultra-high-speed chargers.

That’s a considerable accomplishment in under thirty months since Electrify America only opened its first site in May of 2018, and works out to nearly four new locations opening every week since then. We’re sure the COVID-19 crisis created delays in permitting, construction and inspections, making the accomplishment even more substantial.

“Electrify America is raising the bar when it comes to the high speed charging experience needed to  expedite the transition to an electric future,” said Giovanni Palazzo, president and chief executive officer,  Electrify America. “In just over two years, we’ve made great progress in expanding our network while maintaining a deliberate focus on delivering the fastest charging speeds possible – 150kW and 350kW. We are confident that reduced charging times and increased charger availability will help Electrify America, and the industry as a whole, deliver the future-proof charging experience that customers deserve.”

Site selection for Electrify America remains a very important aspect of the network’s expansion, since the goal is to locate the sites conveniently along major routes and in metro areas. The sites also need to be strategically located near shopping, banking, and dining amenities and must be in a safe, well-lit area.

Each charging station has between three and ten individual DC fast chargers to accommodate multiple vehicles charging at one time. The chargers utilize the fastest technology available today – providing speeds of up to 150kW and 350kW with that goal of reducing the amount of time spent charging. Electrify America’s stations do not power-share, so one car’s charging speed will not lower if someone plugs into the station next to their car.

However, it hasn’t been all roses for the network, as good news about its rapid expansion is often overlooked due to continued issues with some of the stations. We recently reported that Electrify America is replacing many of its faulty stations with new equipment, and promises the new stations will be more reliable.

In addition to the news of its 500th charging station site, Electrify America has also announced the opening of the first Electrify America DC fast charger site to feature a solar-powered canopy. The site is in Baker, California,  where the solar panels charge an on-site stationary energy storage system. The large battery in the energy storage system stores power when electricity costs are low and supplements power during high points of consumption, minimizing the impact on the electrical grid. The company expects to have more than 125 fully operational stationary energy storage system installations in 2021, with 75 located at charging station sites in California.