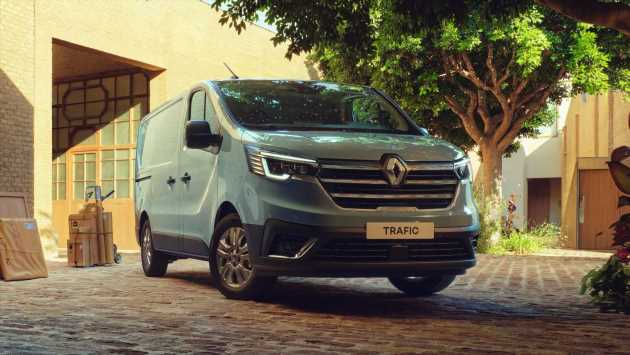 The new Renault Trafic van gets the same upgrades as the recently revamped MPV model, including a new eight-inch touchscreen

Renault’s revamped Trafic panel van is available to order in the UK now, with prices starting from £25,200 excluding VAT. First deliveries are expected to arrive this December, with the new model targeting rivals such as the Ford Transit Custom and Volkswagen Transporter.

Styling tweaks for the updated Trafic are relatively restrained, being limited to some new LED headlamps, an updated radiator grille and Renault’s now trademark C-shaped daytime running lights, which bring the van’s styling into step with the company’s passenger cars.

Renault has given the Trafic’s interior a bolder makeover, adding some new silver trim to the dashboard, a redesigned instrument panel, tweaked door panels with wider armrests and a new gear lever. There’s also some new LED lighting for the load bay.

The backrest of the middle seat folds down into a miniature desk, revealing a swivel stand (like those found on conference suite chairs) and enough space for a laptop. There’s also 84  litres of storage space dotted around the van’s interior in various places, including a 54-litre cubby located underneath the passenger seat.

Buyers can also now have the same eight-inch infotainment system as in the new Clio and latest Zoe, which is backed up by three USB ports, a wireless smartphone charger and a 4.2-inch digital display in the gauge cluster.

Cheaper versions of the Renault Trafic go without the new touchscreen, but every model comes as standard with a DAB radio, Bluetooth and USB smartphone connectivity, electric windows and an alarm system with an immobiliser.

In terms of carrying capacity, the Trafic offers between 5.8 and 8.9 cubic metres of space, depending on the model. It’s available in two lengths and two heights – and, thanks to a handy hatch in the passenger bulkhead, the longest version can accommodate items up to 4.15 metres long.

Trafic buyers have a choice of four engines, all of which are based on the turbocharged 2.0-litre four-cylinder diesel unit. The entry-level Blue dCi 110 unit has 108bhp, above which sit 128bhp, 148bhp and 168bhp variants.

Every engine is hitched to a six-speed manual gearbox as standard, although the two most powerful engines (providing they’re specified in Buisness+ trim or above) can be optionally equipped with a seven-speed automatic for an extra £2,000.

Prices for the range-topping Sport+ model start from £31,450. Upgrades over the Sport variant include a different set of 17-inch alloys, metallic paint and body-coloured side mouldings. There’s also some extra equipment, such as keyless entry, climate control, lane departure warning and traffic sign recognition.

The Trafic can also be specified in crew cab form, which adds a second row of three seats behind the driver and glazed side doors. The upgrade increases the van’s starting prices by £3,350, although it can’t be combined with the entry-level 108bhp diesel engine.

Renault is also keen to direct buyers towards its new Five Year Pro+ finance package, which starts from £370 per month on a hire purchase basis. As part of the package, you’ll get five years or 100,000 miles-worth of warranty and free servicing, five years of roadside assistance and five years zero-percent APR.