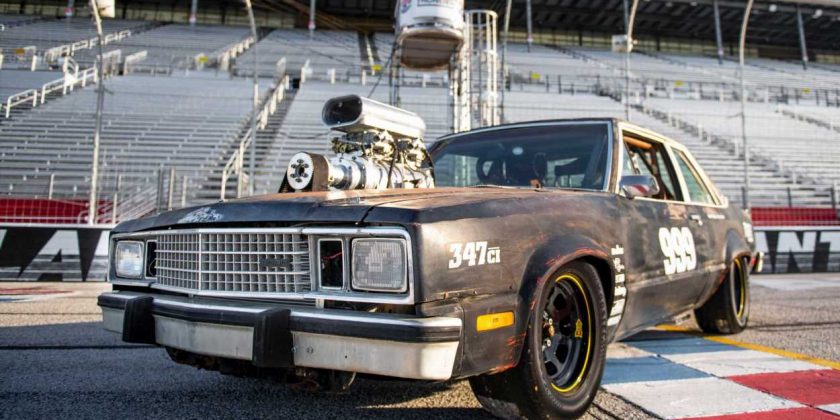 When Mike Finnegan told David Newbern and Mike Cotten they were going back to Atlanta Motor Speedway for season two premiere of Faster With Finnegan, he challenged them with finding a hot rod that evoked late-1970s, early-1980s NASCAR. Then they brought him this used-up 1978 Ford Fairmont. And now Finnegan has to race Corey LaJoie, who’s driving the NASCAR Racing Experience No. 43 Ford Fusion.

Related: Sign up now for a free trial to the MotorTrend App! Stream the all-new Top Gear America, 100+ episodes of Roadkill, Engine Masters, and thousands of hours of hit car shows.

A sketchy V8-swapped Fox-body (that’s right, the Fairmont rode on the same platform as the Mustang of the era) going up against a full-on NASCAR Cup car? Sure, the No. 43 Ford Fusion is a few years removed from the championship circuit, but it was still a top of the line race car not long ago. Finnegan and LaJoie aren’t battling it out on the infield this time, either, they’re going out on the big track: Atlanta Motor Speedway’s 1.5-mile, 24-degree banked quad-oval superspeedway.

So how is the Faster With Finnegan team going to pose any sort of threat against a 600-hp, wind-tunnel-designed, purebred racing beast (with a top-level driver behind the wheel, don’t forget)? Horsepower! It solves everything, or so they hope. The Fairmont gets a BluePrint Engines 347 stroker crate engine, good for 415 naturally-aspirated ponies right out of the box. This is Faster With Finnegan, though, and the guys aren’t stopping there.

A moment of silence for a fallen hero, please. The second-ever Faster With Finnegan project car, one of the most patriotic burnout machines ever (c’mon, it was in front of Mount Rushmore), the T-Bizzle Thunderbird (cough, Fox-body) was totaled, as we all know. But the gorgeous Blower Shop 6-71 supercharger and twin Holley four-barrel carburetors that adorned it survived! And guess which Fox-body they’re going on next? The combo of Ford 302, stroked to 347 cubic inches and 6-71 blower should be good for 600 hp to wheels of the Fairmont.

Speaking of, some Hoosier R7 racing slicks on 15×8-inch wheels get swapped out for the street-legal drag radials that could barely stick to the turns during testing. Cotten and Newbern also cut a coil off of each of the springs on the Fairmont, lowering the ride and slightly increasing the spring ratio. This all comes at the advice of Corey LaJoie.

The friendly NASCAR driver advised Finnegan and friends to stiffen up the springs as much as possible, especially in the right front corner, and lower the car as much as possible (for aero). NASCAR Cup cars run 1,000-pound-per-inch springs on three corners, and a 1,300-pound-per-inch spring on the right front—the corner that experiences the most force on a banked oval like Atlanta Motor Speedway.

This wouldn’t be a Roadkill Universe show if everything happens exactly to plan. Finnegan had plans to convert the ’78 Fox-body front suspension to adjustable coilovers with stiffer springs, but the top plates didn’t get delivered in time. In true Roadkill fashion, out came the death-wheel to lower the car.

Another Faster With Finnegan must: naming the car. And what better name for a Ford Fairmont with flared fenders than “Ric Flairmont?” The fenders needed the full bodywork treatment to make room for the wider track meats if Finnegan didn’t want to cut them apart at 100+ mph on a banked turn. Plus, Finnegan always wanted to name a widebody car after Ric Flair.

We can’t stress enough how serious the guys are about safety, despite appearances. Finnegan had an S&W Performance Group rollcage put in the Fairmont, and a set of NASCAR-approved racing seats (made by Corey LaJoie’s dad!), all done by the pros at Denton Speed and Machine. The No. 43 Ford Fusion NASCAR Racing Experience car is capable of 40-ish-second lap times at Atlanta Motor Speedway—that means speed averaging well over 130 mph. Finnegan wants to make sure he’s well protected when he tries to max out this supercharged and widened Fox-body.

We always tell you to stick around to the end of an episode, that’s when all the surprises happen. Mike Finnegan is by no means a slouch in the driver seat, both when hooning and driving seriously, but professional race car drivers get paid the big bucks for a reason. You need to see what LaJoie can do behind the wheel of Ric Flairmont, it’s worth the wait.