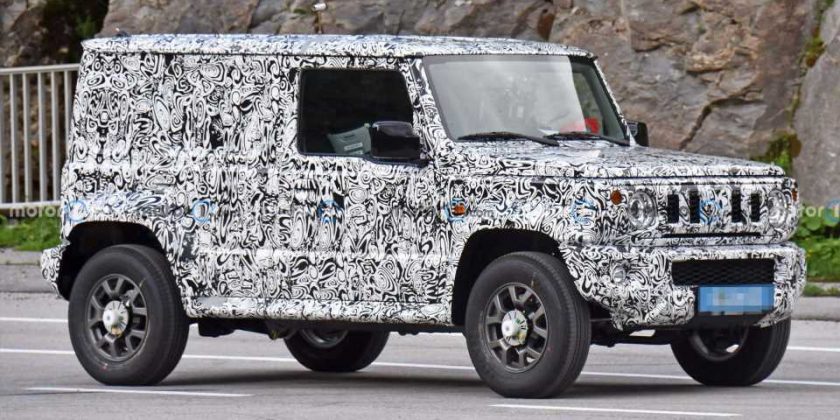 The Suzuki Jimny is about to grow a bit bigger and gain an extra pair of doors to make the little SUV a bit more utilitarian. These spy shots catch one of them testing in Europe. The development team isn’t too happy with the photographers snapping the pictures because one of the engineers gives the finger in a photo.

Aesthetically, the five-door Jimny looks identical to the existing version, except for the lengthened body and extra doors. The spy photographer estimates that the wheelbase is about 11.81 inches (300 millimeters) longer than the current model. The width and height appear to be unchanged.

Another interesting note from the photographer was that this vehicle seemed to be driving without producing any engine noise. This suggests that the Jimny is getting a hybrid powertrain. It’s not clear whether the existing 1.5-liter naturally aspirated gasoline engine making 100 horsepower (75 kilowatts) would continue to be available or whether this potentially electrically assisted setup would completely replace it.

Switching to the turbocharged, mild-hybrid engine would give the Jimny improved emissions. This might rectify the current issue that limits the model’s availability to a two-seat, commercial product in Europe.

According to a rumor out of Japan in 2021, Suzuki plans to call this model the Jimny Long, which fits with exactly what it is. The same report claims this version uses a turbocharged, mild-hybrid engine, which fits with what the photographer of this one is saying. At least for JDM models, the price for the five-door would be about 300,000 yen ($2,220 at current exchange rates) more than a three-door.

Another claim in that Japanese report is still more of a mystery. It alleged that Suzuki was working on a rugged version of the Jimny Long that was going to have a major focus on off-road ability. We haven’t seen any indication about this model actually existing, though.

Look for the Jimny Long to debut before the end of the year. Expect it to be on sale in Europe in 2023.