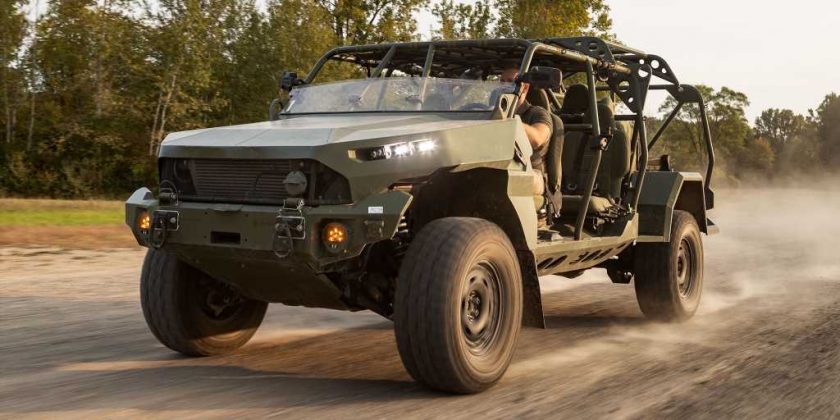 America’s Army infantry soldiers have mostly been getting around on foot, but they’re about to get a radical upgrade in the form of the Chevrolet Colorado ZR2-based Infantry Squad Vehicle. Check out the behind-the-scenes backstory to learn how this crash program was executed in a matter of months. But here let’s just dive right into what might just become a great recruiting tool for the Army’s 35 Infantry Brigade Combat Teams.

The military generally runs on diesel fuel and the chemically similar JP-8 and F-24 fuels, so the ZR2’s 2.8-liter turbodiesel inline four-cylinder engine is modified to sense and adjust for these fuels automatically. Further improvements for ISV duty end up boosting output to 275 horsepower and 420 lb-ft of torque—89 more horses and 51 more lb-ft than stock. That’s almost all just tuning, largely made possible by tailoring it to suit the Army’s unique duty cycle and, um, more “lenient” emissions requirements. There is no NOx trap and hence no diesel emissions fluid, though no emissions controls are “defeated” per se and you won’t see ISVs “rolling coal.”

Usage and maintenance patterns are quite different. A stock Chevrolet Colorado ZR2 needs to be capable of enduring 20,000 miles per year for a decade with potentially spotty maintenance. By contrast an army vehicle may only accrue a tenth as many miles per year over its 30-year expected lifespan, during which it will experience a very different service life involving fewer miles, more engine hours, and brief periods of “highly intense” usage. So some durability requirements and safety margins are exceeded a bit for the ISV. Oh, and a “Combat Mode” disables all limp-home nannies to get soldiers out of harm’s way. And the ISV will be treated to a strict regimen of preventative maintenance checks and services. Sadly, while you’ll be able to buy most of the suspension modifications listed below from GM Performance Parts, GM will not sell chip kits to achieve these power and torque figures.

How Quick Is the ISV?

The Army won’t share its figures but they would be meaningless anyway because they test at max 8,200-pound GVWR (5,000 max for the truck, 3,200 pounds for the nine troops and their gear). But we’ve tested two diesel trucks with six-speed automatic transmissions and similar weight-to-power ratings (18.0 lb/hp), which both did the zero-to-60-mph run in 6.9 seconds and ran the quarter-mile in just over 15 seconds at around 90 mph, so that’s a safe guess for how the ISV would fare in an official MotorTrend test with just the driver onboard. That’s well better than the 9.7 seconds to 60 and 17.2 seconds at 78.4 mph we’ve recorded on a stock ZR2 diesel.

The heart of the ZR2’s suspension is its implementation of Multimatic Dynamic Suspensions Spool Valve shocks, which run a unique damping-curve tuning developed by the Hall folks to work with the GM Performance Jounce Shocks that team also developed. These hydraulic jounce bumpers cushion the full-travel suspension hits, and for ISV duty their frame mounts are welded on (GM Performance versions use a mount that clamps over the frame). Special skidplates protect the lower shock mounts, the rear mount for the front upper control arm is reinforced, and the rear differential gets welded-on reinforcements—all of which address failures Hall Racing has experienced—many of which were witnessed by Chevy engineers standing by in the pits during the races. Sturdy canvas straps limit rebound travel to protect the ball joints. The ZR2’s standard 17-inch Goodyear Wrangler Duratrac tires are replaced by the similar-performing BFGoodrich Mud Terrain T/A KM3 tires the Chad Hall team uses because they have endured 4,000 miles of racing durability testing. They’re mounted to 7.0 x 17-inch beadlock wheels.

I buckle into the ISV’s four-point seatbelt on a crisp fall morning with chief engineer Mark Dickens riding shotgun and two Army brass folks in the back to ensure I don’t endanger their baby. My first two laps of a gravel circuit at GM’s Milford Proving Ground are negotiated in rear drive with the rear axle locked. This prototype also lacks StabiliTrak, which will be standard, defaulting to Competition mode so as not to worry drivers that it’s losing power and so as not to overheat and compromise the brakes. Loaded as we were to about a quarter of the ISV’s 3,250-pound payload rating, it feels vastly lighter and more tossable than a stock ZR2 on hand for comparison. It responds in a textbook manner to all off-road car-control inputs. It is extremely easy to pitch it into a turn and hold a drift with the throttle. The engine induction sound is also quite amusing, because the intake snorkel draws air from the front passenger foot well, amplifying the turbocharger wastegate noises. Soldiers who grew up hooning a side-by-side around their farm’s back forty will fight for the driver seat and may struggle to resist the urge to take the ISV out on solo “missions.” Switching to 4WD Hi reduces its propensity to drift significantly, but it definitely feels like the faster way to get from A to B—and do so without causing one of your eight passengers to toss their MREs. A set of analog gauges monitor the vital functions, while a center screen indicates when a shift of drive modes or differential locking is underway.

My morning also included a drive of a diesel Colorado ZR2. With the windows closed and none of that wastegate noise coming from the glove compartment, it seemed like a completely different vehicle altogether, but the performance was essentially identical. Carrying 13.5 lb/hp instead of 11.8, the stocker felt sluggish with just two adults onboard. Also, the stability control—even in competition mode—was blinking almost constantly while running in 2WD with the rear axle locked, so maybe the ISV won’t be quite as drifty after all. I ended my morning with a ride in the Chad Hall racing ZR2, which served as the real-world development platform for all of the aftermarket ZR2 racing parts. It’s powered by the gas V-6, so it is always revving higher than the diesel, and with a pro driver at the helm it was just as drifty as I’d managed to make the ISV, but it didn’t feel any faster.

The purpose of the ISV is to airdrop the vehicle and troops into a safe zone to meet the soldiers, then drive it through low-threat areas at speed, walking the rest of the way on foot where threat is greater. This way the troops should arrive much less fatigued than they would have if they’d walked or been carried in a Humvee or JLTV. We sampled a set of concrete whoop-ti-dos spaced to guarantee severe bottoming and topping of the suspension. The ISV didn’t feel quite as cushy as the SCORE racers I have ridden in, largely because it has less suspension travel. I was grateful for the four-point harnesses on this maneuver. But it was vastly more comfortable and felt far less damaging to the truck than running the same course at the same speeds in the stock vehicle. The Chad Hall ZR2 suspension took the whoop-ti-dos just as adroitly as the ISV had done earlier.

It may encourage Army NASCAR fans to know that their new ISV is born in NASCAR country. Hendrick Motorsports will receive stock Chevrolet Colorado ZR2 crew cab frames (from the nearby Mooresville, North Carolina, facility where all Colorado frames are produced) and weld up the chrome-moly steel exoskeleton, along with welding on all suspension modifications to the frame. Speaking of that frame, the high part that protects troops riding in the way back is designed to fold down in 10 seconds to make it fit in a Chinook. Special pins retain the clamshell hoops to their diagonal supports using a ratchet mechanism that expands a rubber component to quell the incessant rattling that the prototypes’ normal steel pins had suffered.

The Army’s initial contract for 649 ISVs will outfit 11 Infantry Brigade Combat Teams (IBCT) with 59 vehicles each between fiscal years 2020 and 2024. The extended contract for 2,065 ISVs will equip all 35 IBCTs with an equal number of ISVs. Of course, the Army isn’t the only service where troops often have to walk; the Marines have expressed interest, as has the United States Special Operations Command (SOCOM), and it could be a natural fit for the National Guard, too.

What Will the ISV Cost Taxpayers?

There are those who have merely taken the announced total contract award ($214 million) and divided by the initial 649 vehicles to come up with the golden-toilet-seat number $329,738. That’s utterly and completely wrong and misleading. All the Army would say on the record was that the “target average unit manufacturing cost” initially set for the program was $177,000, and we’re assured that GM came in “significantly under that.” You also need to know that the Army doesn’t purchase vehicles the way we do. It negotiates a price that incorporates lifetime service parts, user training, and a host of other unusual extras.

Will Infantry Squad Vehicles Eventually Be Sold to the Public?

Steven Herrick, the Army’s ground mobility vehicle product lead, cautions that we shouldn’t hold our breath. “The Army has a very strict procedure for what determines when a vehicle is deemed an ‘Excess Defense Article.’ That could be a half-century from now.” The good news is that enterprising troops returning to civilian life but looking to continue the hooning fun of the ISV need only find a lightly rolled ZR2 (it happens with the duty cycle the civilian models see!), torch off everything but the floorboards and cowl (taking care to preserve the wiring harness), then weld up a steel cage. This part is easier because you won’t be high-hot-slinging it under a Blackhawk or moving it around in a Chinook, so it doesn’t need to be that strong or fold down. Then add all the GM Performance Parts available from the dealer, and shop around for an “off-road-use only” chip kit for the Duramax. (Xtreme Diesel Performance advertises a 10 percent military discount!) It sure seems like it’ll be easier to talk folks into the Army Infantry once they hear they won’t have to walk everywhere and they’ll get to ride around in this real-life Halo Warthog.