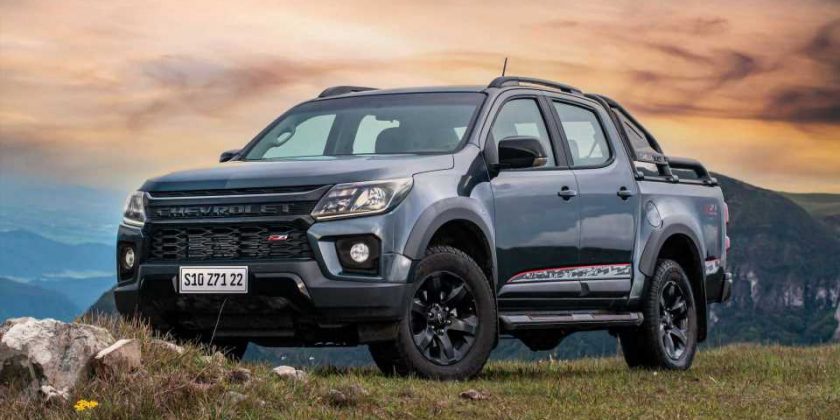 Pictured here in the Z71 off-road guise, the Chevrolet S10 is a small truck that General Motors refuses to sell in the United States. It’s available in Brazil, Argentina, and other Latin American and would compete with the Ford Maverick and Hyundai Santa Cruz in the US. Rather than bringing it stateside, GM is toying around with the idea of a purely electric pickup that would have two doors, a low roofline, and a 4- to 4.5-foot-long bed.

Automotive News saw marketing images of the zero-emission workhorse while visiting GM’s design studio in Warren, Michigan. It’s apparently “futuristic and sporty” while being slightly smaller than the compact gas trucks from Ford and Hyundai. It’s unclear which badge it would wear should it be approved for production, nor is it known what it would be called. If green-lighted, the production model would cost less than $30,000.

Chevrolet’s director of affordable EV and crossover design, Michael Pevovar, says GM is “creating these [designs] to get a reaction and then to try to modify it or move on. What does work? What doesn’t work? What’s expected? Affordability is the key portion of this, and there’s lots of different ways to approach it.” He went on to say it might end up being too small for the architecture the engineers have in mind, so it could ride on a different platform in the end.

Whatever the case may be, Pevovar emphasized it needs to be affordable. It’s too early to say if it would ride on a dedicated electric platform or an adaptation of an existing truck. Sam Fiorani, vice president of global vehicle forecasting at AutoForecast Solutions, believes it would be the latter scenario by giving the S10 an electric drivetrain. However, this is just speculation at this point.

Let’s keep in mind that aside from the S10, Chevrolet also has the third-generation Montana it unveiled at the end of 2022. It’s a front-wheel-drive smaller truck with a turbocharged 1.2-liter gasoline engine making 133 horsepower. AutoForecast Solutions’ representative also suggested GM’s cheap electric pickup might be related to the Montana pictured below.