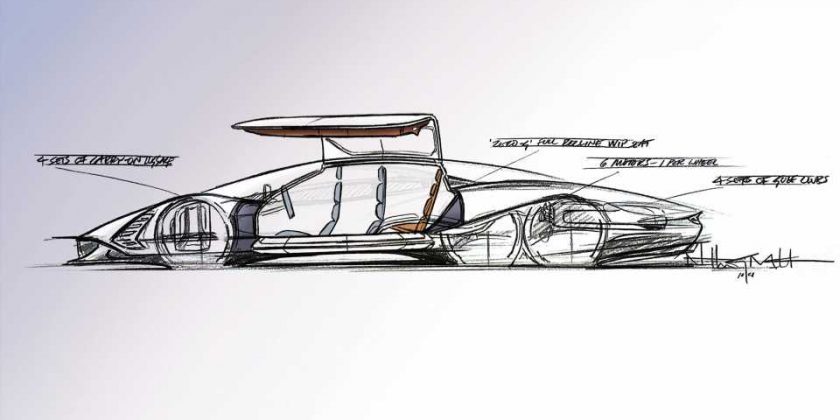 They call it Deep Space, a new EV hypercar project from the delightfully unhinged folks at Hennessey. It will arrive in 2026, feature an innovative diamond seating arrangement and promises to create a whole new segment—the EV hyper-GT. Think of it as a Texas-sized

powered by six electric motors making somewhere around 2400 horsepower and you’re not too far off. It’ll be “the world’s most expensive EV” at circa $3 million. Oh yeah, it has six wheels, too.

All of this would sound far-fetched if it wasn’t for Hennessey’s track record with cars like the Venom GT (a Lotus Exige-based missile powered by a twin-turbocharged LS7 that hit 270.49 mph back in 2014) and

its most recent hypercar, the F5

. This crazily ambitious project features a proprietary carbon fibre chassis, high-end technical partners and eye-popping performance. Its 6.6-liter twin-turbocharged “Fury” V-8 makes 1,800 hp and Hennessey claim it should exceed 311 mph. Hennessey has already delivered the first customer F5 and production is ramping up quickly. The run of 24 coupes is sold out and we’re hearing rumors that Hennessey will reveal a limited run Spyder version in early 2022, and maybe even a more track-focussed derivative. Hypercar business is good for Hennessey.

Project Deep Space is a whole new animal. The chassis will be larger to accommodate three seats across and a fourth fully reclining “VVIP” seat directly behind the driver. Hennessey claims this layout brings private jet luxury to the automotive world. Each of the six wheels will have its own motor, and although John Hennessey doesn’t want to talk about specifications you just know it will be suitably intergalactic.

“I don’t think we’ll go as far as 3,000 hp,” he says with a wry smile. “Somehow 400 hp per motor sounds a good number to me.” The electric motors will be supplied by Cosworth Engineering, who recently acquired Hennessey’s long term technical partner Delta Motorsport, based in Silverstone, England.

It’s hard to describe this project as “logical” but there’s no question that pure EVs have yet to prove themselves in the hypercar space. There are plenty of players from Rimac, to Pininfarina to Lotus, but so far nobody has managed to turn stunning performance into actual sales success. The visceral appeal of ICE is still king in this rarefied sector, and hence a hyper-GT that puts more emphasis on quiet, otherworldly performance blended with personal aerospace luxury seems like a formula that might just work. Hennessey is feeling bullish and says they’ll build 105 of these extraordinary machines.

Many questions remain. Is launching a $3 million car with enough torque to counter the Earth’s rotation really part of our sustainable future? Is a 5,000-plus-pound, 20-foot-long EV really going to find 105 buyers? Who the hell could fall asleep in the VVIP chair when the driver ahead has 2,400 hp at their disposal? Can a small company from Texas out think, out gun and outperform the likes of Bugatti, Rimac, Porsche and Ferrari in this new EV world? Who knows? But it should be fun finding out. In the meantime, the F5 will be attempting to burst through the 300 mph barrier at a NASA facility some time in 2022.