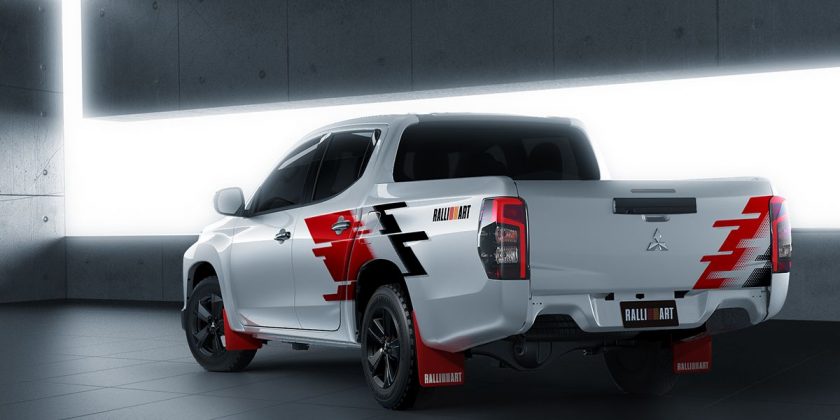 In a move to spice up what’s arguably the industry’s most dowdy range of cars, Mitsubishi earlier this year announced it was to relaunch the Ralliart brand. Reviving Ralliart, which has been largely dormant since 2010, is supposed to bring about a sense of “Mitsubishi Motors-ness,” the Japanese company said at the time.

Hopefully, you kept your expectations in check, as Ralliart’s first project isn’t exactly spectacular. Ladies and gents – give a slow handclap for the Triton Ralliart and the Pajero Sport Ralliart, which are reserved exclusively for the Thai market.

The Triton Ralliart is based on the low-rider version of the pick-up and is available as either a single ‘Club Cab’ or a double cab style. Whichever you go for, you’re getting a solid white paint finish spruced up with Ralliart decals, Ralliart mudguards in a fetching shade of red, a red load bed liner with Ralliart branding and red and black accents dotted around the body.

The Pajero Sport meanwhile gets a similar set of decals and more red and black accents. Although we’re not given a look inside the car, Ralliart-branded floor mats are promised.

So to sum up, the relaunch of Ralliart centres on some mudguards and stickers. You weren’t rooting for a new Lancer Evolution or something, were you?

This is just the start, though – Mitsubishi Motors Corporation president and CEO Takao Kato has promised that “there is more to come,” and earlier this year there was talk of motorsport being back on the agenda. It’s still best to keep your expectations in check, but hopefully the next time we have a Ralliart announcement, it’ll be slightly more interesting.