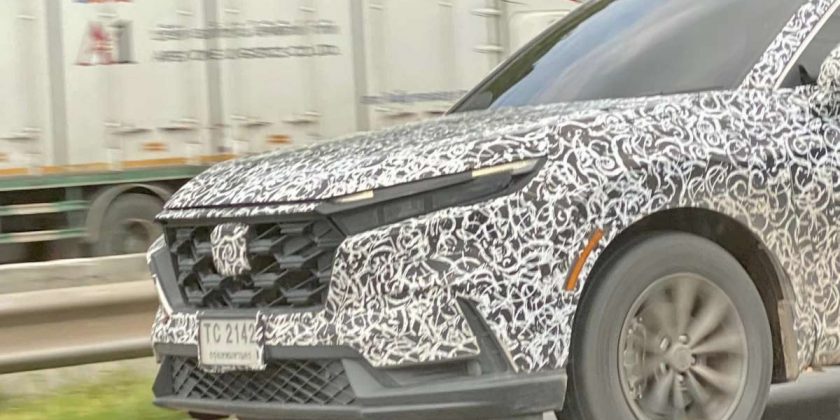 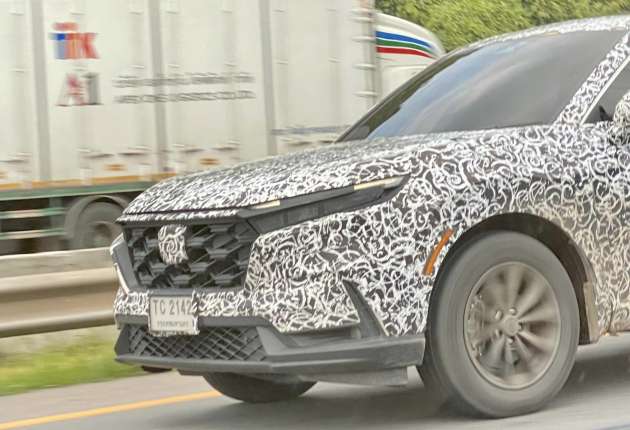 It looks like it won’t be too long before the sixth-generation Honda CR-V is launched in Thailand, as the SUV has been spotted undergoing testing yet again. This time, two units of the CR-V were spotted on a highway by Jeerasak Suwanpeuch, both wearing a considerable amount of camouflage.

In one of the photos, we get a good look at one of the CR-V’s redesigned front end, which suggests it to be a hybrid variant. In the United States where the latest CR-V first made its debut, Sport and Sport Touring variants are only offered with a petrol hybrid powertrain and get this look. Key design cues include a hexagonal-shaped front grille with rugged-looking dashed pins on its insert, while the rear fascia features trapezoidal-shaped exhaust finishers.

Meanwhile, non-hybrid variants (EX and EX-L) in the US get a VTEC Turbo engine, a slightly different grille design with simpler dashed pins as well as no exhaust finishers – the last identifying cue is what we see on the second test car in the photos.

It should be noted that both looks can be paired with the HPD (Honda Performance Development) package that adds front lower bumper trim, lower door trim accents, more prominent wheel arch surrounds and a tailgate spoiler – this is what was shown when the CR-V was first presented in July.

The hybrid version of the CR-V uses a setup similar to what is found in the latest Civic e:HEV, with a 2.0 litre Atkinson cycle four-cylinder engine and e-CVT working together with two electric motors for a total system output of 204 hp (207 PS).

As for the VTEC Turbo option, it has a 1.5 litre turbocharged four-cylinder that develops 190 hp (193 PS) and 243 Nm of torque, with slight tweaks so when these figures are delivered across engine speeds. The mill continues to be paired with a CVT that has been tuned for better NVH.

Of course, we’ll have to wait until the all-new CR-V goes on sale in Thailand to find out precisely what powertrains will be available over there. The outgoing model is currently offered with a 2.4 litre naturally-aspirated four-cylinder engine making 173 PS and 224 Nm, mated to a CVT and optional AWD. It’s different in Malaysia, as the fifth-generation model can be had with either a 2.0 litre NA four-cylinder (113 PS and 189 Nm) or 1.5 litre VTEC Turbo (193 PS and 243 Nm).

For now, there’s still no indication from Honda Malaysia as to when the all-new CR-V will arrive here, but we can hopefully expect it to happen soon. Looking forward to it?