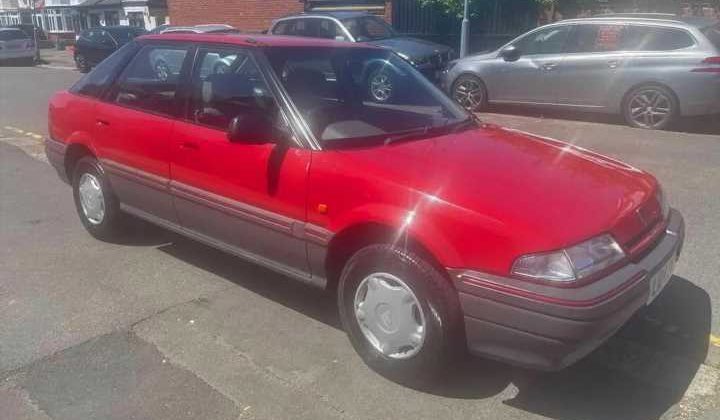 Not many people call their dogs Rover these days but it’s a fair bet that more than a few PHers will be calling this week’s Rover a dog. Would they be right to say that about this 214, though? Whatever your thoughts may be on British Leyland products, what you’re looking at here is a 43,000-mile one-owner hatchback with no massively alarming faults on the MOT history. Beyond that, you can bet your last parcel shelf scatter cushion that it will attract a lot of attention at any local car show, especially if you live in the Midlands.

This is the Mk2 ‘R8’ Rover 200. The first SD3 four-door saloon of 1984-89 was the second joint venture project between British Leyland and Honda, the first one being the Triumph Acclaim. Size wise it sat between the Maestro and Montego, but it was pitched into a posher niche than both of them.

Our Mk2 was available from 1989 to 1997, though it was technically replaced by the more familiar R3 hatch in 1995. There was a four-door saloon version too, the 400, although the 200 was a five-door hatch and that was a big step up for the newly privatised Rover Group. It would be an overstatement to say that it transformed Rover’s image from bowler hat to baseball cap overnight, but it certainly moved it up to holiday trilby level.

It was a decent little car. More than decent, in fact. It made contemporary rivals like the Escort and Astra feel like yesterday’s chip paper and drove well enough for What Car? magazine to make the 200 its 1990 Car of the Year. The Coupe version was distinctly elegant and the engines were good. The 1.6-litre petrol was a Honda unit, the 1.8-litre and 1.9-litre diesels were XUDs from PSA, and the 1.4-litre 16-valve petrol was a debutant for Rover that you may have heard of: the K-Series. Thanks to the 5-door’s low weight (1,065kg) you were never humiliated by the performance from the 95hp-ish 1.4 motor, with 11sec 0-60 times and a chassis that was fluid enough to let you use all of the performance most of the time.

Given the low mileage of our shed you wonder whether the head gasket has been changed. Although we’re not told in the ad whether it comes with a wodge of paperwork, you’d like to think that the single owner would have said yes to everything when it came to servicing. If the gasket hasn’t been done, well, that might make it one of the last in the country, if not the world, to be running the original item, so there’s some paleontological interest there.

The car has apparently been for sale for a little while as the vendor’s ad says that it has just passed its MOT even though that was back in May. That report brought the first mention of corrosion lightly affecting a front subframe and a rear suspension mounting point. That’s a shame but hardly surprising what with the age of the car and Britain’s taxing weather. The only advisory on the previous 2021 test was the brake pedal rubber wearing smooth. Of course, it always helps to be only doing 2,000 miles a year on average, the rest of the car’s time presumably spent in a garage dreaming of the open road.

Rimmers still support cars like this and they reckon they have most items in stock, so keeping it going once the rust has been expunged shouldn’t be an issue. Parts won’t be dear, 14in tyres certainly aren’t, and you can expect mpg figures in the high 30s plus vehicle tax of £170. Probs best not to have an accident in one but with fewer than 70 of these 214s left on British roads this example has surely got to be worth saving even at £1,500.

The Shed family has a dog by the way. They got it from the village blacksmith. When Shed got him home he made a bolt for the door. Here all week etc.