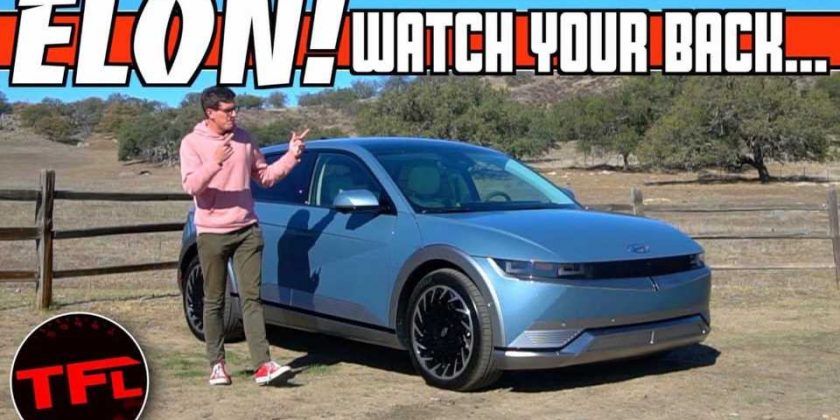 Tommy from TFLnow says the all-new Hyundai Ioniq 5 is the first car he’s experienced that he believes is a “REAL” threat to Tesla. Based on what we know about the Ioniq 5, as well as the positive reviews it has received, Tommy could be right. The Ioniq 5 has most of the makings of a successful EV, and any successful EV is arguably a Tesla competitor. But will it be a true threat?

The whole Tesla killer narrative has come and gone over the years. As new and compelling EVs come to market, the concept resurfaces. That said, it seems there are fewer articles these days about true Tesla killers. Practically every new car these days is a Tesla rival, but the proof will come if any of these Tesla rivals actually outsell Tesla. The automaker has made it clear that its competition isn’t other EVs, but rather, gas-powered cars.

An EV like the Hyundai 5 seems to check all the right boxes, and we’ve noticed many Tesla owners seem to really be impressed by it. There’s no denying that Hyundai is doing an outstanding job with its EV efforts. However, thus far, it hasn’t produced or sold them in high volume for the US market.

The demand for EVs is growing exponentially, and people seem to be buying almost every electric vehicle most automakers can produce. Ford just cranked up production and sales goes for its Mustang Mach-E, and it has previously dialed up F-150 Lightning production plans far ahead for the electric pickup truck coming to market.

So, what makes the Ioniq 5 a “real” threat to Tesla?

The Hyundai Ioniq 5 features unique styling, plenty of passenger and cargo space, impressive range, and incredibly quick fast-charging capability. This Hyundai EV can recharge from 10% to 80% in 18 minutes, which is the fastest 10% to 80% of any electric vehicle available today.

Moreover, the Ioniq 5 fared very well in Euro NCAP testing, it’s supposed to come with two years of free charging on Electrify America’s network, and it should arrive with a very reasonable starting price. What’s not to like?

Check out TFLnow’s video to learn much more about the Hyundai Ioniq 5. Then, let us know if you think it can rival Tesla. Perhaps more importantly, will Hyundai work to produce and sell this compelling new EV in large enough quantities to make an impact?