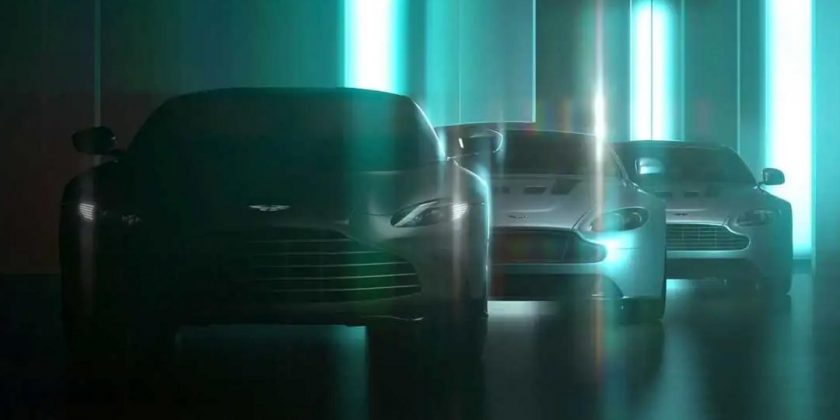 We’ve already seen the spy shots of the Aston Martin Vantage V12, and then we had the briefest press release in history confirming that it was on its way. That made us smile with, ‘You’ve heard about it. You will certainly hear it coming. V12 Vantage. It’s not just a Limited Edition, it’s the Final Edition. Returning in 2022.’ Unfortunately, the smile waned when the next word was ‘ENDS’ and we had no further flesh on the bone.

Annoyingly, we still don’t. Instead, the tortuous PR drip-feed continues with this teaser shot of the all-new Vantage V12 next to its forebears. It’s a strange setting. All three appear to have been beamed down from somewhere extra-terrestrial, which gives it more than a whiff of the futuristic. And look, we absolutely love that the latest addition to the Vantage range is celebrating the V12, yet even we can see that it doesn’t represent the future. Or even the current zeitgeist. It does sound great, though, as the video demonstrates.

In the new image, we can see a large, traditionally styled Aston grille. It’s taller at the sides than the one we’ve seen on the Vantage F1, with more classic-looking silver-finished strakes. It is certainly the furthest so far from the open-mouthed, Grouper fish-look that arrived when the current Vantage went on sale. That’s probably a good thing. And until we get any further images or specs, we’re still going on what we’ve been able to deduce from the prototype images for all the other Vantage V12 insights.

That had an area of gauze on the upper surface of its bonnet, which would appear to be extra cooling vents as per the previous V12 Vantage. There are also further openings at the front, next to each headlight, and farther up, just below the A-pillars. At the rear, the diffuser looks to ape the one seen on the Vantage F1 – albeit with two centre-exiting exhausts rather the F1’s side exiting pipes – but there’s no large, track-day tea-tray spoiler. Instead, the V12 makes do with a more elegant solution befitting its grand tourer status: a Gurney flap running across the upper edge of the boot lid. The spy shots also show wheel arch extensions that point to a wider track. It’s hard to gauge the extent of this, though, because looking at the rear, especially, the arches are over extended – to the point they stretch well beyond the edge of the tyres.

And what about power? Well, we know that the twin-turbocharged 5.2-litre V12 is currently running at anything between 640hp and 725hp in production spec. If we look back to the previous V12 Vantage as a reference point, which had 510hp, that had the same power as the DBS Coupé of the time. Now, if Aston are calling this the Final Edition that points to it being the balls-out version from the off so, potentially, it could run the full 725hp that the current DBS has, or at least the 700hp that the V12 Speedster has.

The only issue would be marketing. Will Aston want to peg the V12 Vantage back enough not to upset the owners who have paid £750k for one of the 88 V12 Speedsters? Or will they be happy to leave that car’s exclusivity as the fillip? Who knows at this stage but the V12 has never made less than 600hp, so, even with that as a baseline, it’s hardly likely to be a disappointment on the performance front.