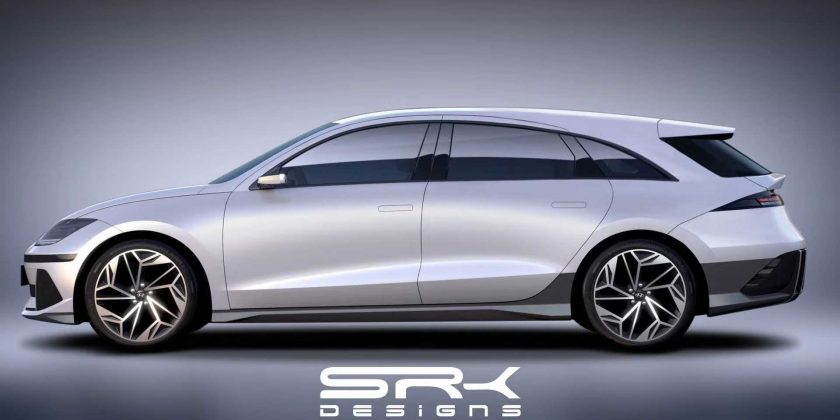 When you look at the side profile of the Ioniq 6, you begin to realize it’s one of those sedans that could use a tailgate given the swoopy roofline and a relatively short rear end. However, the peeps from Hyundai decided to stick with a traditional trunk body style in the same vein as the Prophecy concept from a couple of years ago. That said, the South Korean brand is open to the idea of a more practical derivative.

Shortly after the Ioniq 6 made its debut, journalists asked the company’s chief designer SangYup Lee whether a liftback was ever considered for the new EV. His answer opened the possibility of an additional member to the lineup better suited for families: “I can make a great hatchback out of that; a shooting brake.” True shooting brakes (with only two doors) are a thing of the past, so he was likely referring to a wagon as has been the case with the Genesis G70 Shooting Brake.

This is where SRK Design’s unofficial rendering comes in, imagining the Ioniq 6 with a more generous cargo area accessible through a tailgate. The electric wagon segment is rarified for the time being as only the MG5 Electric and the much more expensive Porsche Taycan Cross/Sport Turismo spring to mind. Sure, Volkswagen will likely launch the ID. Aero with a long roof to mirror the ID. Space Vizzion concept. In addition, reports state BMW is planning i3 and i5 Touring models, but these are all a few years away.

Hyundai’s design boss also hinted at a performance model, presumably an Ioniq 6 N. If we’re allowed to dream, a combination of the two would be peachy. The mechanically related Kia EV6 GT makes 577 horsepower (430 kilowatts) and 546 pound-feet (740 Newton-meters) of torque, so having that in an Ioniq 6 N wagon would be more than enough for the “poor man’s” Taycan Cross/Sport Turismo.

We’re in for a long wait since Hyundai hasn’t even released technical specifications for the Ioniq 6 sedan. Those will be published next month when the EV will receive its first public outing at the Busan Motor Show before going on sale later this year. In 2023, a three-row SUV on the same E-GMP platform will become the third member of the Ioniq lineup (not counting the soon-to-be-discontinued original model).