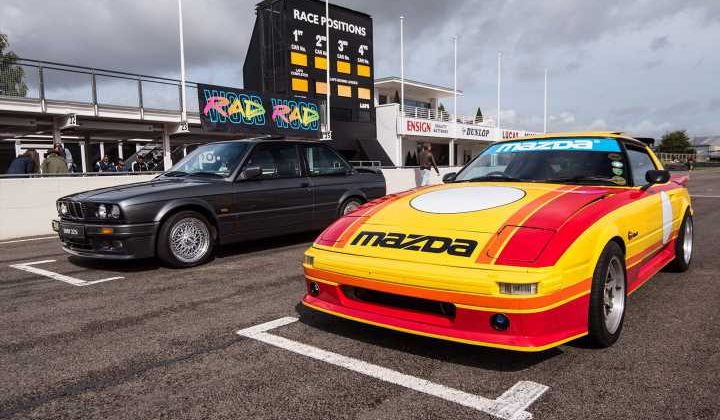 Love the cars, clothes and culture of the 80s and 90s? RADwood is for you…

Those who keep up to date with what’s going on in the car world across the Atlantic will already know about RADwood. Founded by podcasters Warren Madsen and Art Cervantes five year ago, it’s a celebration of everything on wheels from the 1980s and 1990s. Plus, for the truly dedicated, the clothes as well. An event designed by millennials for the cars they grew up wanting and can now afford (if they’re lucky) has proved unsurprisingly popular; now with Hagerty at the helm, RADwood is coming to the UK.

To be hosted at Bicester Heritage on August 20th, RADwood will play host to anything and everything from 1981 to 1999. ‘Bodykits, wide-arches, ICE installs…everything from Miami Vice to Max Power, from city broker 930 Turbos to big-bumper GTis, it doesn’t matter what you drive, as long as it was built between 1980 and 1999’ reads the press release, and that sounds pretty good to us given it’s going to cover everything Jaguar XJS to Saxo VTS, Monza GSE to Alfa GTV and Rover SD1 to Fiesta 1.1 – plus all the cars in between. Whatever you like from a great two decades of cars should be there.

For Hagerty, having RADwood in the UK aims to sit alongside its Festival of the Unexceptional in terms of event strategy. FOTU celebrates the back to basics charm of the austere cars we hold close to our hearts; RADwood is proudly about the excess of 80s and 90s automotive culture, dubious tracksuits, widebody kits and all.

Certainly the organiser is promising a UK car event like now other, with arcade games, a DJ set and BMX displays if you can be dragged away from the cars. “A great day out for families and groups of friends who want to relive what was acceptable in the 80s” is promised. Creepy TV personalities not included. RADwood costs £20, with tickets on sale now. And if you need appropriate wheels, what could be more of its era than a Corrado VR6? See you at Bicester.