J.D. Power today released its 2018 India Customer Service Index Study which showed the influx of younger customers into the automotive world. The study also provided us a glimpse into the after-sales experience of customers and ranks the brands accordingly. This year it’s Hyundai who takes the top spot in after-sales customer satisfaction, with a score of 912. Tata Motors ranks second with a score of 874 while Mahindra comes in a close third with 865 points. While Hyundai has held the No.1 position from last year, there’s been a slight change in the brands that have come in second and third. In fact Mahindra has jumped one place and so has Tata Motors when compared to the study done in 2017. What is important to know here is that both companies have surpassed Maruti Suzuki in this year’s findings. Maruti Suzuki was ranked No. 1 in 2016 and slipped to 2nd spot last year. This year however, it’s slipped further down to 8th place. But Tata and Mahindra are not the only ones who have bettered Maruti Suzuki. Ford, Datsun, Toyota and even Honda have gone ahead of the largest market share holder.

In fact, the study showed that 28 per cent of customers who visit dealerships for service are aged 30 years or younger. These set of customers have higher expectations of the service processes executed at the dealerships than more mature customers. The study encompasses several aspects, such as the performance of a thorough multi-point inspection around the vehicle; listening back and repeating all customer requests; review and explanation of the work pre- and post-service; and regular vehicle status updates. 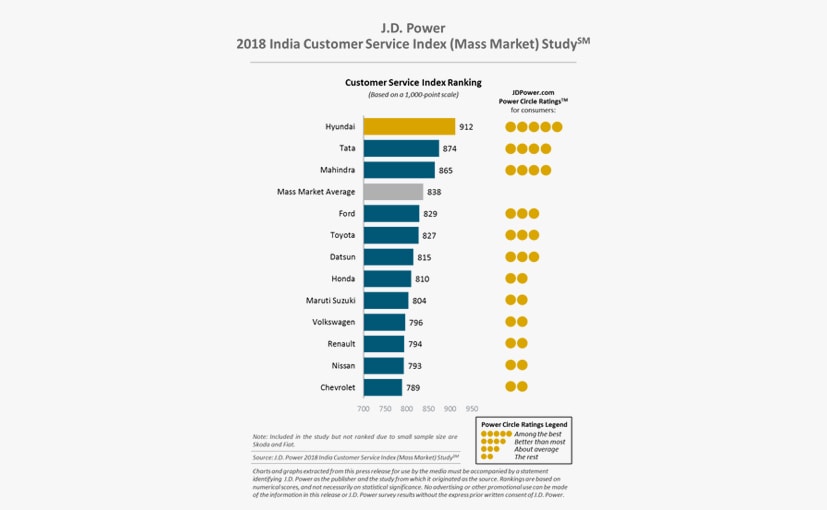 Ford, Datsun, Toyota and even Honda have gone ahead of Maruti Suzuki in terms of ranking

What’s driving customers to service centres is digitization and the study shows that 58 per cent of customers say that the service advisor used a tablet during the service initiation process. Satisfaction among these customers is higher than among those who did not experience it. Satisfaction is also higher among customers who accept their service advisor’s recommendation for additional service work to be performed than among those who do not accept the recommendations.

The 2018 India Customer Service Index Study is based on responses from 9,045 new-vehicle owners who purchased their vehicle between March 2015 and August 2017. The study was fielded from March through August 2018.