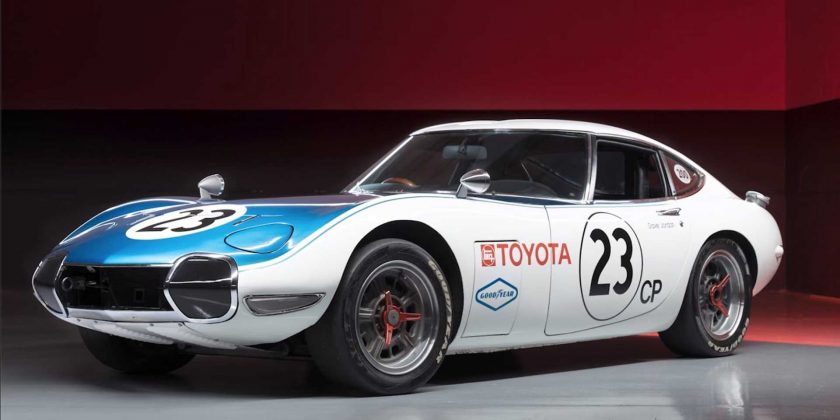 If you drive a Toyota to a meetup of Shelby enthusiasts, you do so at your own peril. You even risk humiliation or unpleasant confrontation if you roll in with a front-wheel-drive Dodge Daytona Shelby Z (which is a very cool car in its own right). In the world of Shelby, vehicles have Blue Oval badges, pack V8 power, and are shaped like Ford Mustangs – occasional F-150 or classic Cobra notwithstanding.

We bet the vast majority of Shelby fans have no idea that, back in 1967, Carroll turned his attention to Toyota’s exceptional sports car, the 2000GT. Three were massaged for SCCA racing in the C-Production class, and the car you see here is one of them. It’s slated to cross the auction block with Gooding & Company on March 4 at the Amelia Island Auction in Florida, but there’s more to this special machine than just its connection with Shelby.

According to Gooding & Company, this 1967 2000GT is chassis MF10-10001. Apparently, it’s the first 2000GT built with a serial number, which alone makes it something special. The car was originally a promotional vehicle for Toyota Motor Sales USA, but Shelby convinced executives to go racing and this car did just that in 1968. It underwent a decade-long restoration through the 1980s, returning it aesthetically and mechanically to its glory days of racing. It’s been in a private collection since then, meaning this is the first time in over 40 years this exceedingly rare car has been offered for public sale.

Being the first 2000GT built with a serial number, and with its connection to Shelby, and being just one of 351 2000GTs ever built all total, this could be a seriously valuable machine. Gooding & Company lists an estimate of $2.75 to $3.5 million, though all bets are off as to what will happen when the hammer falls on March 4.