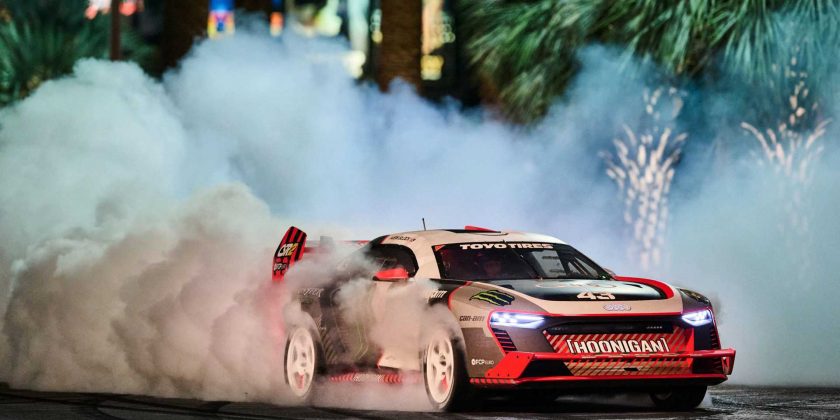 Electrikhana is finally here. Ken Block takes the Audi S1 Hoonitron on a high-speed adventure through the Las Vegas Strip, including into a casino. Along the way, some of Audi’s most important race cars make cameos.

Things kick off with a misdirect. It seems like Block is walking up to Walter Röhrl’s Audi S1 Pikes Peak rally car, but then the camera pans to Hoonitron. The car has a Formula-E-sourced electric motor powering each axle. The exact output isn’t clear, but this video shows that the machine has plenty of power for big slides at high speeds.

The first major setpiece is on the strip where Block spins the Hoonitron 180 degrees and slides into a gap in the boulevard to speed away in the opposite direction. He follows up with a 360-degree pirouette while continuing to move forward.

The next big move is driving into a casino. Block stays in the entry area but has enough room to do some donuts. People at a nearby craps table urge him on.

Block then travels to the top of a parking garage. Up there, he finds a boxing ring and two fighters. Punching bags are along the outer edge of the area, and the Hoonitron’s tail sends them flying.

The final big stunt is creating a smokescreen in front of The Strat.

The Hoonitron went through more than double the normal amount of tires while making Electrikhana compared to Block’s other Gymkhana videos. Judging by the amount of smoke that seldom dissipates from the cabin, it’s not hard to see how this is possible.