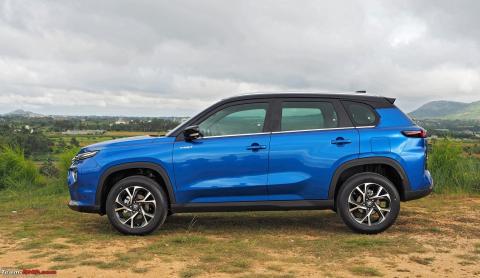 So far, we’ve got basically two: the Toyota-Suzuki twins and the City EHEV. Drove both, and the performance versus fuel economy tradeoff almost isn’t there. They are, in short, awesome.

BHPian AulusGabinius recently shared this with other enthusiasts.

So I thought I’d something I’m pretty excited about. Strong hybrids, and what I’d love to see in India with that tech.

So far, we’ve got basically two: the Toyota-Suzuki twins and the City EHEV. Drove both, and the performance versus fuel economy tradeoff almost isn’t there. They are, in short, awesome. Sure, they could definitely be more refined, but they win in two key ways. The power and range are not compromised over CNG and EVs (FYI, I’m not a believer in battery electrics), but the fuel economy is fantastic as well. But so far they’re basically a premium crossover SUV and a premium mid-size/full-size sedan. I’m curious to see what everyone would want to see with this tech. So far with what they sell overseas, personally I’d love to see the Toyota C-HR, the Honda Jazz, and maybe a Suzuki Alto or, best of all, my personal favourite the Swift to become a strong hybrid. Cheers, everyone, and looking forward to the petrolhead community!

Here’s whst GTO had to say on the matter:

I like the hybrid implementation of the Honda City, but the one from Maruti-Toyota is a level lower. Regardless, I think hybrids are “today’s” solution & EVs are a distant “tomorrow”. In terms of going mainstream, strong hybrids can easily double or even triple the fuel economy of any car, simply because they are designed for exactly our driving conditions. Hybrids are best in the city & their advantage is the strongest in bumper-to-bumper traffic.

Now that Maruti, Toyota & Honda have taken the lead, I’m sure it’s going to trickle lower down the food chain. Once the components are localized, I don’t see why anyone with high running would hesitate to pay 1 – 1.5 lakhs extra for a strong hybrid. Remember, we are a culture that has historically paid 1 – 2 lakhs extra for the economy of diesel engines.

Here’s what BHPian Chevyspark had to say on the matter:

Strong hybrid engines in these car are imported components. 4-5lacs higher priced than ICEs. So, it doesn’t make economic sense for any manufacturer to provide sub 4m car with strong hybrid. The small car market in India aka sub 4m cars are on downward trend or slowly dying segment. No new car launch is happening in this segment. So it seems like a wish which is hard to fulfill.

Here’s what BHPian ajayc123 had to say on the matter:

Strong hybrids are a mature technology, well suited for congested city driving, as they are able to offer nice torque at lower speeds.

Scale, indegenization, and tax rationalization should help the cause.

My wishlist would be two things:

Here’s what BHPian Mustang_Boss had to say on the matter:

In my opinion, Everything is wrong with the current crop of Hybrids available in India.

Hybrids are reliable, efficient, but considering the efficiency levels we seek from ultra small cars, i guess it might not be possible.

I would like the companies to sell the car by mentioning the cost of replacement battery in the Advertisement. Only then we will get to know the true sales of EV’s. Till then, they are just cashing in on buyers ignorance.

All those who are going to curse me, A Tesla will always have much longer battery life because , it got a bigger battery and the weather conditions it operates in are colder. A Tata will never last not even half as long as a Tesla, because its operating in a much hotter environment, with just 33% of battery of a Tesla.