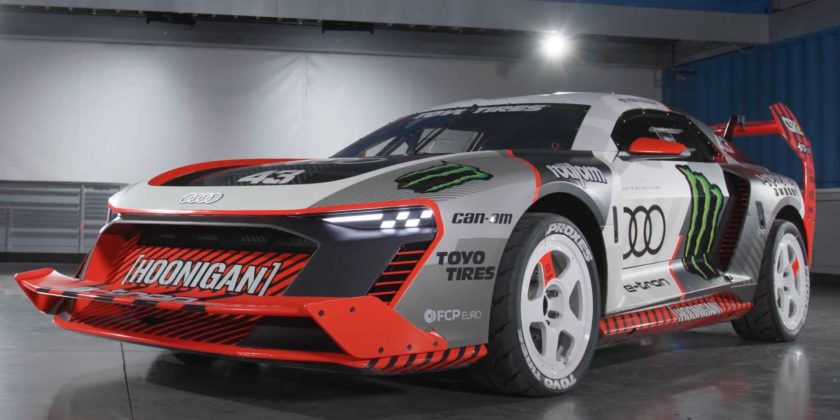 Ken Block’s next Gymkhana – renamed Electrikhana for the electric Audi S1 he’ll be piloting – debuts on October 25. A new video from the TheHoonigans YouTube channel shows us our first look at the event’s teaser, but it also provides a deep dive into the custom-built Audi race car.

The car, officially named the Audi S1 E-Tron Quattro Hoonitron, looks unlike any other Audi ever. It took the automaker four weeks to develop the design and six months to turn it into a reality. For comparison, it took two years to design and build the Hoonicorn Mustang.

The custom EV features four battery packs from an Audi Q7 and a dual-motor configuration – one motor for each axle, giving it all-wheel drive. Audi sourced the motors from Formula E. Going from a car with an internal combustion engine to one with electric motors was a shift for Block. The lack of a gearbox and third pedal altered how he could control the car, often relying on the clutch to modulate power in ICE vehicles. That’s not possible in the electric Audi, but the car’s available instant torque presented new possibilities we’ll see next week, and laid the seeds for future ideas.

Specific powertrain details remain a mystery, including the car’s official output figures. However, we know that the Hoonitron chewed through more than 100 tires during filming, more than double the typical amount.

Inside, Block sits far back in the cabin with his feet elevated – similar to a Formula 1 race car driver . It was one of the weirdest seating positions Block had ever experienced. The car features two cooling systems. One is used for normal operation, while the other assists during charging, which was a concern for filming. The crew didn’t want to waste precious hours waiting for the car to recharge.

Audi designed the S1 E-Tron Quattro Hoonitron from the ground up, drawing its design inspiration from the iconic Sport Quattro S1 Pikes Peak racer. We’ll see it in action soon enough when Block’s Electrikhana video drops next Tuesday. Be sure to tune in to see all the action.