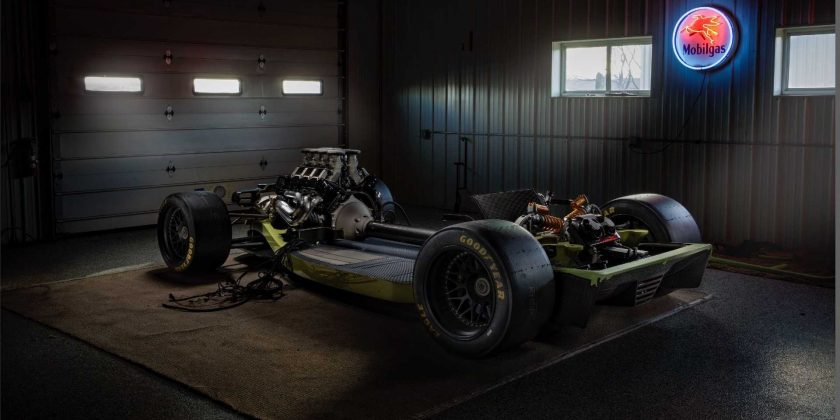 The 2022 SEMA Show is nearly upon us. While many automakers have bowed out this year, Ringbrothers will be there in force with four custom builds. It’s the first time the Wisconsin-based company has debuted four vehicles at SEMA, and recent teasers offer a glimpse of what to expect when the covers are lifted.

A wild truck called Enyo is of particular interest. According to Ringbrothers, it’s a 1948 Chevy pickup that fuses a ’40’s work truck with Formula 1. That’s a bold statement, and while Ringbrothers doesn’t specifically say it, we’re pretty certain the image at the top of this article is the Enyo’s underpinnings. It features a cantilevered independent suspension and a belly pan that’s a single piece of carbon fiber. At the front, a 1,000-horsepower marine racing engine powers the truck. And trim on the lower portion of the chassis matches the color of the confirmed Enyo teaser image, featured below.

That will be the headlining act for Ringbrothers at SEMA, but it’s not the only bow-tie project vehicle on display. Bully will be a 1972 Chevrolet K5 Blazer with big tires for having fun off-road. To that end, it gets off-road coilovers, a custom interior, and a 1,200-hp LS3 V8 for power.

There’s also a 1969 Chevrolet Camaro called Strode that also runs a bonkers LS3 V8, producing 1,000 hp with the help of a big supercharger. Ringbrothers says it rides on an extended wheelbase and sports a widened carbon fiber body, but to keep it honest, there’s also a 1969 Ford Mustang named Patriarc. There’s no mention of power, but apparently, it incorporates some interesting aero features.

All total, Ringbrothers says 35,000 combined hours went into these four custom vehicles. Based on previous Ringbrothers SEMA builds we’ve seen, these rides should be something to behold. All will debut on November 1.

The 2022 SEMA Show runs from November 1-4 at the Las Vegas Convention Center.