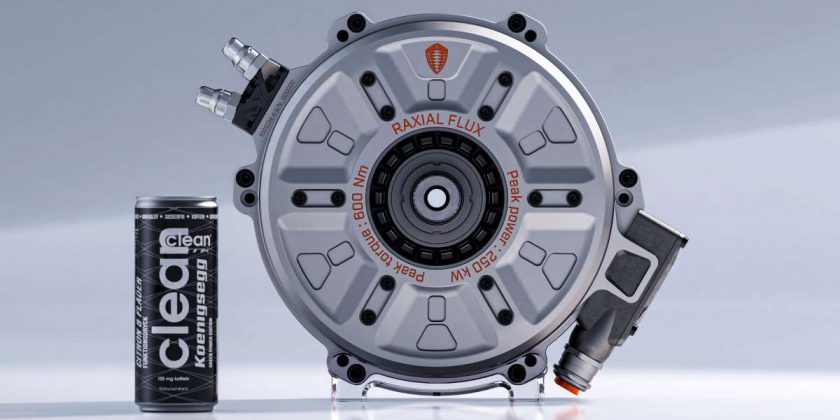 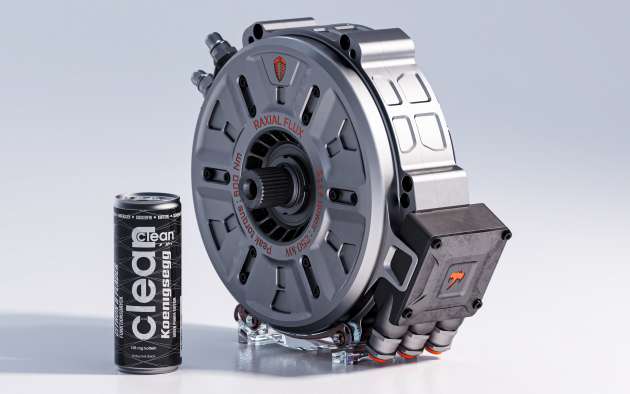 Koenigsegg has unveiled its first in-house developed electric motor and drive unit, which it says can be used in a wide range of applications, such electric vehicle (EV) powertrains, aerospace, VTOL (vertical take-off and landing), marine and more.

Developed for the Gemera, the e-motor is called Quark and is design to be both compact – the 330 ml energy drink can is there for scale – and lightweight. In the carmaker’s four-seater, the Quark weighs just 30 kg, but without the extra driveline bits, this is reduced to just 28.5 kg.

“The Quark is designed to bolster the low-speed range of the Gemera, where you need it, for brutal acceleration. The ICE (internal combustion engine) then focuses on the high-speed range. What this means in terms of performance for the Gemera is a big power surge followed by a continuous record-speed push to 400 km/h without any torque or power losses,” explained Dragos-Mihai Postariu, the company’s electric motor design lead. 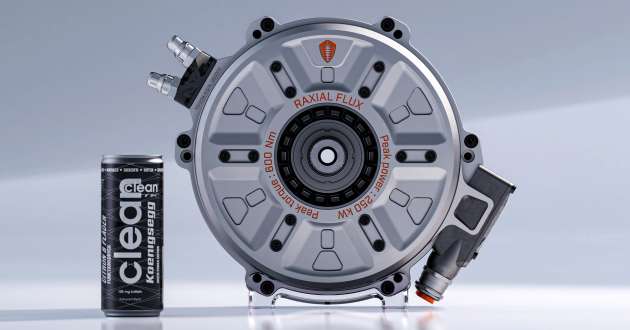 To achieve these outputs, Koenigsegg relooked at the fundamentals of magnetism, materials, cooling and packaging, combining both radial and axial flux constructions (to make a “raxial flux” topology) to provide a good balance between power and torque. The result, according to the company, is an e-motor that has the best torque to power to weight ratio in the industry.

Koenigsegg’s e-motor development lead András Székely said the Quark has a shaft made out of 300M steel typically used in motorsports and aerospace, while direct cooling was chosen for its efficiency and compact design. Even the rotor uses the company’s Aircore hollow carbon-fibre technology that is featured in the carmaker’s wheels, steering wheel and seats.

“The Quark is unique in its high efficiency in combination with its class-leading torque-to-power-to-rpm-to-weight matrix. This means, when using the Quark in applications such as marine, aircraft or VTOL, there is no need for a step-down transmission, instead direct drive can be achieved, as the rpm of the motor is right from the get-go,” commented the company’s CEO and founder, Christian von Koenigsegg.

While one Quark is already impressive, Koenigsegg also went ahead and combined two to create the Terrier. This setup sees the addition of David, the company’s silicon carbide (SiC) six-phase inverter that weights just 15 kg, has a volume of 10 litres (again, an energy drink for scale), operates on 850 volts and can deliver 1,300 ARMS AC, with up to 750 kW oof power. There are two David units in the Gemera for 12 phases and an output of 1.5 MW.

The Terrier – a two-Quark-one-David configuration – is so named because of the dog breed that are “characterised by their small, energetic and fearless demeanour.” Weighing just 85 kg, the drive unit produces the equivalent of 680 PS (670 hp or 500 kW) and 1,100 Nm, with the ability to control each motor separately to allow for torque vectoring.

“The Terrier surpasses today’s drive units, needing only one inverter (instead of two), as David’s 6-phase lends three phases to each Quark, thereby drastically reducing weight, size and components. Furthermore, given the Quark’s flat packaging, David can neatly slot between two Quarks to create a square super-dense package,” the company said.

“Finally, as the Quarks give massive power and torque at reasonable rpms, only small low-ratio highly efficient planetary gear sets are needed at each output. The compact and unique packaging allows the Terrier to be elasto-bolted to the monocoque or chassis directly – thus allowing for design, engineering and luxury accommodations previously not possible. This trait also potentially cuts away the complexity of added subframes or weight,” it added.