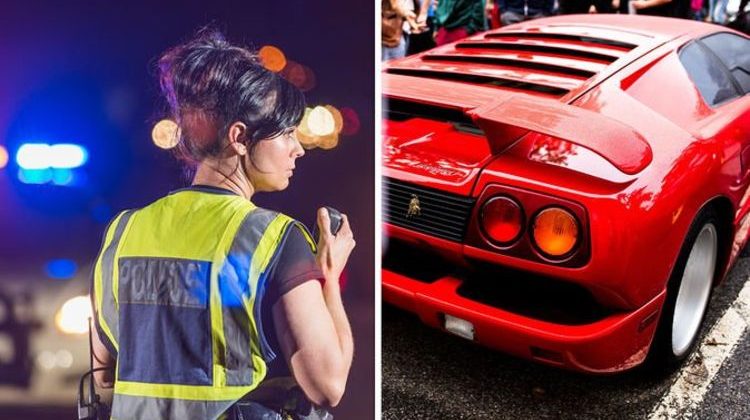 Kelvin Fletcher says he 'scraped the bottom' of Lamborghini

When the officer stops for a break at a service station, she spots a Lamborghini which catches her attention: the car doesn’t have a front plate.

PC Hollis approaches the owner to let him know that a car without a front plate is illegal, as well as his back plate which is gold in colour.

“It’s too dark, needs to be white,” she explained.

“Having a gold plate is illegal. Because it is not picked up by ANPR cameras if it’s too dark,” the officer said.

“I wasn’t aware the plate was an issue,” said the driver.

The driver, however, doesn’t look too bothered by the £100 fine, but instead, he’s enjoying his encounter with the young female officer.

“I rarely had a run in with police officers, she’s probably ranked top of my list as a cop,” he said.

PC Hollis replied: “I told you, that’s not going to get you anywhere!”

The driver continued: “She’s been friendly and spoken like a human being, which is nice.

The officer asked the driver: “So what is it what you do?” to what the driver answered: “property, mainly.”

“Sounds like it’s me asking: so how do I own one of these? What do I have to do? Or maybe marry someone like yourself. There you go, sorted!” the officer said jokingly.

“Well, hey look… we can negotiate,” said the driver.

“You just told me you’re married, it’s too late!” answered the officer.

“Flattery doesn’t get you anywhere, I’m afraid,” she said.

The driver was then allowed to continue his journey to Scotland although PC Hollis warned him he could potentially be stopped and fined again.

The owner of the Lamborghini then unveiled some secrets about his luxurious car.

“There is no cup holder, so you have to drink your coffee outside.

“And it’s actually very noisy in there, four hours to Scotland feels like eight,” he admitted.