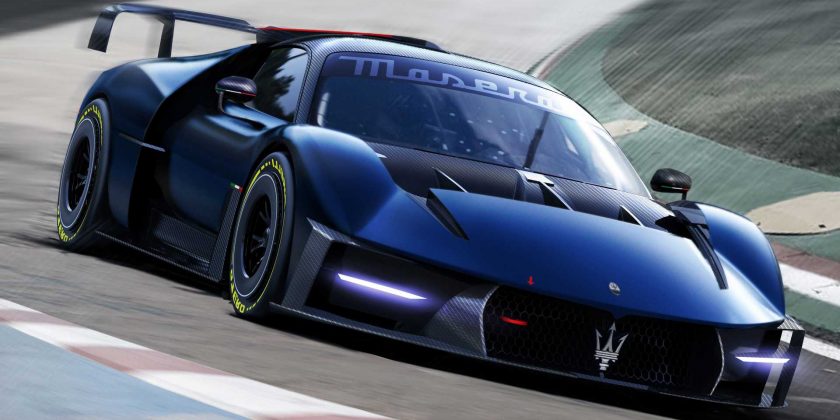 The MC20 isn’t a true successor to the MC12, but much like the Ferrari Enzo-based supercar from the mid-2000s, it too is getting a track-only derivative. Announced in mid-July, the Project24 is now back in fresh imagery, albeit only renderings yet again rather than actual photos of a car. Nevertheless, we get to see Maserati’s flagship with a wild aerodynamic body featuring butterfly doors facing the sky.

The aerial view shows the illuminated central fin stretching from the roof scoop to the rear wing.  We’re being told there won’t be two cars alike as all 62 units planned for production will be truly unique. Owners will configure their cars through the Fuoriserie personalization program and Maserati says the Project24 is going to be its most customizable car to date. Not homologated for public roads, the hardcore machine is currently known by its internal codename but should get a proper moniker at a later date. It remains to be seen whether it’ll gain the “Versione Corse” suffix like the track-only MC12.

By not having to comply with emissions regulations, the meaner derivative uses an upgraded configuration of the Nettuno engine. The twin-turbo 3.0-liter V6 now develops 740 hp or nearly 120 hp more than the street-legal model. While there’s no word about torque for now, it has likely increased from the 730 Nm (538 lb-ft) accessible in the MC20 with a license plate.

With a dry weight of fewer than 1,250 kilograms (2,756 pounds), it’s also much lighter than the road car. Gone is the eight-speed, dual-clutch automatic transmission as it has been replaced by a six-speed sequential racing gearbox with paddle shifters. The monocoque and body are made from carbon fiber as part of the diet, which also includes the Lexan front and side windows. The 120-liter fuel tank, fire extinguisher, rain light, and roll cage have all been homologated by FIA.

Other changes compared to the standard MC20 include the centerlock 18-inch forged wheels with slick tires and Brembo carbon-ceramic ventilated brakes with race-spec calipers and improved cooling. A passenger seat will be optional in the Project24, and so will the in-car camera and tire pressure monitoring system. At an additional cost, Maserati will throw in a rearview camera and a “driving performance optimization display.”

Pricing details have yet to be revealed, but it’s certainly going to cost more than the $215,995 road car.