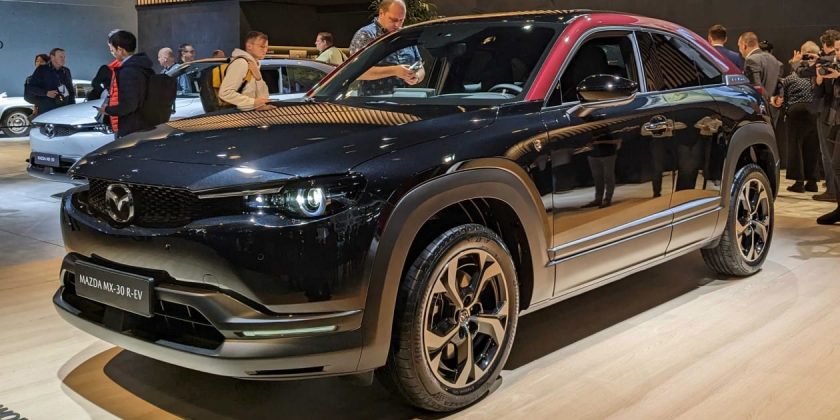 Mazda has been without one of its iconic rotary engines in its line-up since the RX-8 sports car was killed off in 2010. But now the Japanese firm is bring back the technology as part of a novel plug-in range-extender set-up in its MX-30 EV.

The new edition is called the MX-30 e-Skyactiv R-EV, and it features an electric motor that drives the front wheels, a relatively small battery by electric-car standards, and then an 830cc, single-rotor petrol engine that keeps the energy level topped up when required.

Battery capacity stands at 17.8kWh – enough, Mazda claims, for the car to travel 53 miles without needing any assistance from petrol power. But when the electricity stored from a plug-in charge session runs out, or the system requires more energy for rapid acceleration, the 74bhp rotary motor will kick in to deliver this. Mazda claims a fuel consumption figure of 283mpg, and says the car will have official WLTP CO2 emissions of 21g/km.

Mazda says the car is capable of travelling over 373 miles when the combination of a single charge and its 50-litre fuel tank is factored in. It can recharge at up to 36kW DC – allowing a full top-up in 25 minutes – increasing to around 90 minutes with a 7.2kW home wallbox.

The electric motor in the e-Skyactiv R-EV produces 168bhp and 260Nm, so despite the more complex powertrain and a small gain in weight, to 1,778kg, the new model is slightly faster than the 143bhp pure-electric MX-30. The R-EV is capable of a top speed of 86mph and can reach 62mph from rest in 9.1 seconds.

The MX-30 R-EV’s hybrid system has three modes. In Normal the car uses the electric motor alone, with the rotary engine switched off. But when the battery level falls sufficiently low, or more power is required for an overtake, the petrol unit will fire up to make sure there’s enough energy in the system to keep the electric motor spinning. EV mode forces the car to keep the engine off for as long as possible – although Mazda admits that if the accelerator pedal is pressed beyond a certain point, the engine will kick in anyway to ensure sufficient system energy.

Finally, Charge mode is designed to maintain or deliver a level of charge during a journey that will allow pure-electric running in a key area – a city or a residential zone, for example. Users can set the target charge level for the battery in 10-per cent increments.

The MX-30 R-EV also offers vehicle-to-load supply, with a three-pin plug that will allow users to run electrical items at up to 1,500 watts. Mazda says this could support cooking appliances, as well as laptops.

There are a couple of exterior cues that highlight the new version’s different powertrain. The e-Skyactiv R-EV will get model-specific badging – including a ‘rotor-shaped’ emblem on the front wings – along with a more aerodynamically efficient alloy wheel design, incorporating a black base tone. The cabin is essentially unchanged, although fitting a fuel tank has reduced boot capacity slightly, from 360/1,171 litres (seats up/down) in the MX-30 EV to 350 litres and 1,155 litres respectively here.

The MX-30 R-EV range will be available in the same three trim levels as the EV edition – Prime Line, Exclusive Line and Makoto – and prices will start from £31,250. In an interesting move, Mazda is matching the EV’s prices across trim levels in what it claims is a bid to give customers a more straightforward decision between the two powertrains.

The R-EV is also being launched with a special-edition, range-topping variant called Edition R. Limited to 400 examples in the UK, and priced at £37,950, the Edition R is designed to “celebrate the return of the rotary engine”. It gets a Maroon Rouge colour accent – an homage to the roof colour of Mazda’s first passenger car, the R360 – while accents on the mats feature the rotary badge and a single white line whose 2.5mm width replicates the size of the car’s rotor-apex seal grooves. Further rotary cues can be found on the keyfob, the curves of which matches the angles of the rotor in the MX-30.

The MX-30 e-Skyactiv R-EV is available to order now, and Mazda expects the first deliveries to reach customers in the summer.