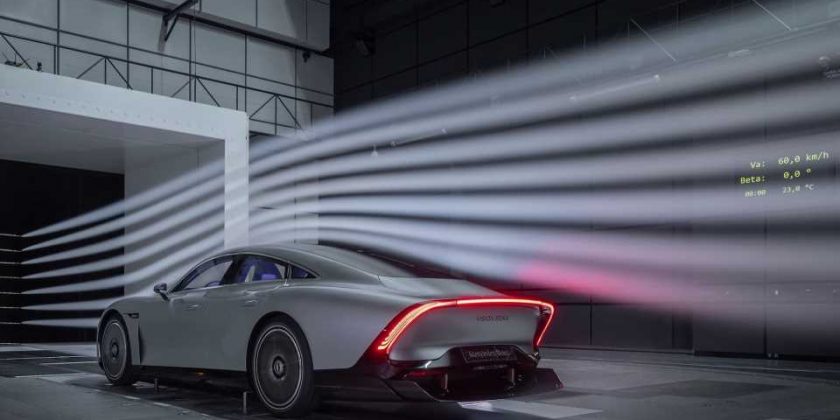 The Mercedes-Benz Vision EQXX concept is design boss Gordon Wagner’s way of showing us that he’s dead serious about the death of the traditional three-box sedan.

He’s said it before, and he’s saying it again: EVs will sacrifice the classic three-box design of a sedan at the altar of aerodynamic efficiency. (“Three-box” refers to the basic shape of a vehicle when viewed from the side, with the engine compartment, cabin, and trunk forming three box-like shapes pushed together.) When it comes to drag, a traditional trunk just isn’t as good as a fastback design for cutting through the air. So-called four-door coupes are no longer a design statement, they’re a necessity.

Mercedes-Benz employees believe range is the EV customer’s biggest concern today, so the company is doing everything it can to increase range without increasing prices. Optimizing a vehicle’s aerodynamics are a big part of the puzzle. While it remains to be seen whether the company will push longtail designs like the EQXX with its tapering rear overhang, the long, sloping C-pillar is here to stay.

The Grille’s Gotta Go, Too

Wagner also confirmed the EQXX previews the new front-end design for Mercedes EQ EVs. The nonfunctional, light-up grilles of the current EQS and upcoming EQE models are effectively placeholders meant to ease the transition away from the grille as a primary design element. Instead, Mercedes will shift focus to the headlights, which make a three-pointed star design when the daytime running lights are switched on. Complementing those stars are a pattern of three-pointed stars embossed in the front fascia where a grille might’ve been in the past.

Do You Really Need a Sunroof?

Mercedes has also confirmed the EQXX’s rooftop solar panels are not a concept gimmick. The company is hoping to begin offering the panels on production EVs in 2024 as an alternative to sunroofs and solid metal roofs. The company claims that, when combined with other technical advancements in the EQXX, the solar panels can reduce the load of non-propulsion systems enough to give the car an extra 15 miles of range on a sunny day.

SUVs are far more popular than sedans of any kind these days, so how will this new design ethos apply to future EV SUVs? Mercedes-Benz isn’t ready to go into detail yet, but the same physics apply. SUVs, being taller, naturally have more frontal area to push through the wind, so optimizing their aerodynamics is even more crucial. The trick will be in balancing that against practicality, as today’s so-called SUV coupes tend to sacrifice some amount of cargo space, rear head room, and rear visibility in the name of style.