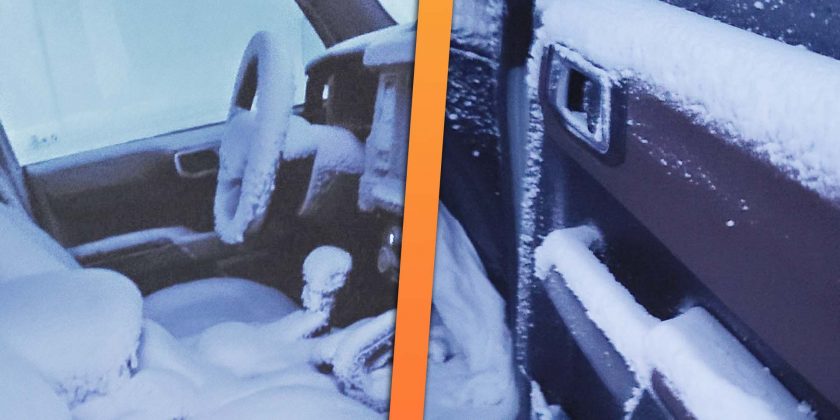 The 2021 Ford Bronco’s rollout got off to a rocky start, in large part due to problems with its roof. The Bronco’s easy-to-remove hardtop, for example, had crippling quality issues that forced Ford to recall every one sold the first few months. It seems the soft-tops aren’t without issues either, as one Canadian Bronco owner claims to have discovered. When he left for a days-long trip in another vehicle, his off-roader was at home with the roof allegedly latched in place. Upon returning, he found his Ford’s interior had filled with snow and ice in a big way.

Tyrone Raddi, who lives in Tuktoyaktuk on Canada’s northern shore, shared photos of the aftermath of a blizzard that swept through town while he was away for five days. His pictures show a thick layer of snow and frost all over his Bronco’s interior, all apparently deposited by 50-mph winds. So thoroughly covered was the interior that it almost looks like Raddi left his roof off entirely, which many commenters accuse him of doing in the various places his photos have been posted.

Raddi, however, insisted his windows were up, telling me that “all the snow got in while everything was secured the way I got [it] from the dealership.” To offer further evidence thereof, he filmed a follow-up video where he ventures out to his Bronco, whose hood sits open, showing its engine coated in snow, and some even stuck to the underside of the hood. Unless Raddi left his hood open while he was gone—not likely for the owner of a new truck who lives inside the Arctic Circle—that would suggest the blizzard really did distribute snow in every last nook and cranny it could reach.

What’s more, footage of the Bronco’s partially cleaned interior shows its headliner to be coated in an even layer of snow fanning out from a spot at the edge of the roof. Another video taken during December’s hurricane-force wind storms showed this part of the roof can be pried from the roll bar by high winds, making it plausible that an Arctic winter storm could exert similar forces on the Bronco’s soft top and allow snow in. That certainly appears to be the case, as a consistent layer inside the roof and out suggests it was latched in place when the storm arrived. 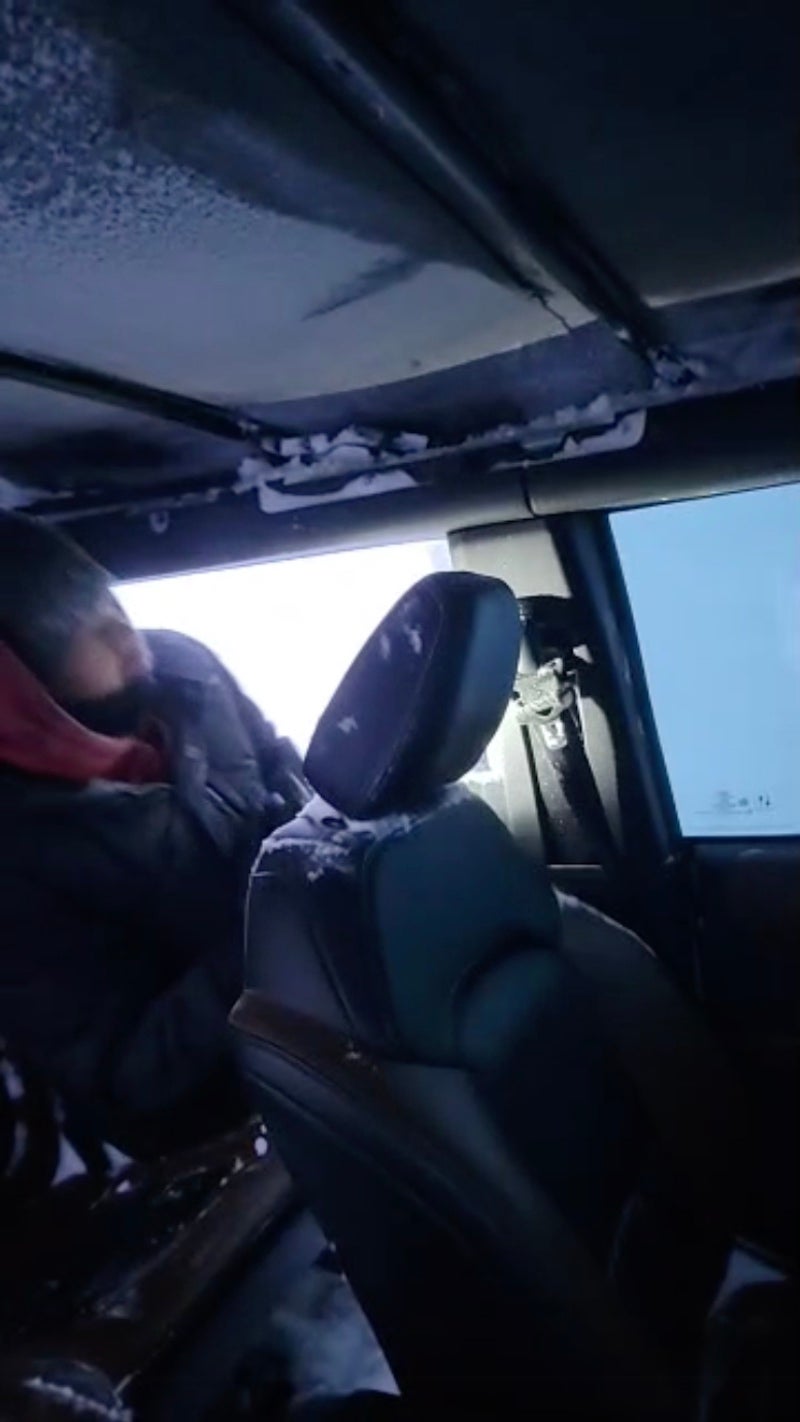 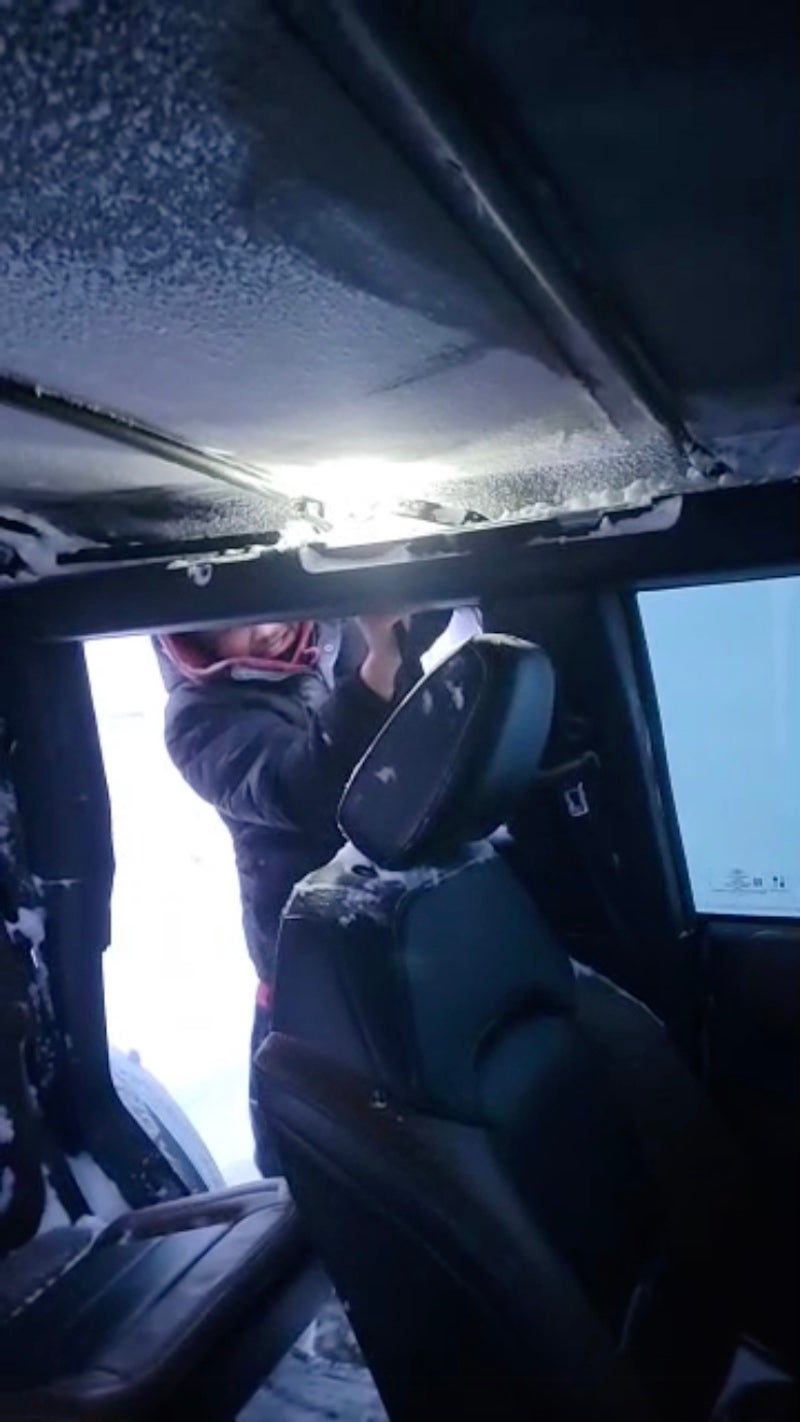 Raddi told me that he didn’t share the photos to knock Ford, stating that he adores his truck and that he believes it best other owners know what could happen to theirs in extreme weather.

“I only posted to warn other people that they may have an issue as mine certainly did,” Raddi said. “It was never about attacking Ford or the Bronco. I still love the vehicle and had no doubt when I got home I would just sweep it out and be able to drive it again.”

It’s tough to say how significant a problem this poses for Bronco owners. On one hand, soft tops already aren’t ideal for climes that see significant snowfall or extreme wind regardless of which vehicle they’re on. On the other, we may continue to see both in greater extremes (and in new places) as our climate changes. In either case, it’s safer to just stick with a hardtop.