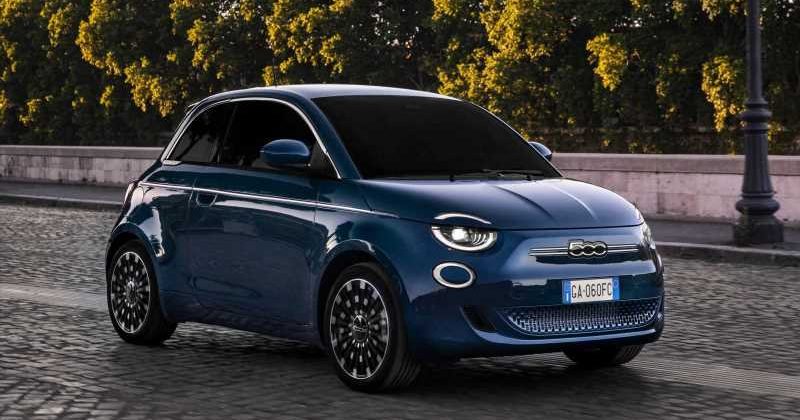 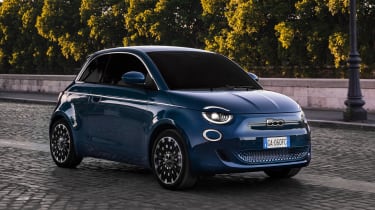 Fiat has revealed first images of the hard-top hatchback version of the new, all-electric 500 city car, which is now available to order in the UK.

Joining the convertible version of the reborn icon, the new 500 hatchback is also offered in a single launch trim level called ‘La Prima,’ with cheaper variants expected in due course.

The hatchback gets a glass-panoramic roof in place of the convertible’s retracting fabric hood, and a cheaper price tag. After the government grant, prices start from £26,995, including a home wallbox fitment. The convertible is priced from £29,000 after incentives.

The revisions required to make the 500 EV are sufficient enough for Fiat to call this model the third generation – following the 2007 rebirth and the original Cinquecento made between 1957 and 1975.

There’s a new platform that results in a slight increase in size compared with the Mk2, so the EV is 60mm wider and 60mm longer. The car’s wheelbase has grown by 20mm too, but the overall length of the 500 is still under four metres.

Fiat hasn’t played around too much with the car’s styling. The side profile of the new EV is still unmistakably 500, but there are tweaks to the front end, with a new bumper that is actually closer in style to the set-up on the original 500. There are split headlights – another nod to the 1957 model – and a new 500 badge on the rear end.

The car has a 42kWh lithium-ion battery pack – enough to deliver up to 320km (199 miles) of range under the WLTP efficiency test. It powers a 117bhp electric motor that can take the 500 from 0-62mph in nine seconds and on to a top speed of 93mph. Those stats apply to both hatchback and convertible variants. 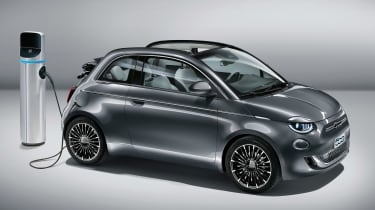 The 500 gets an 85kW DC charger, so the car can be recharged from flat to 80 per cent of capacity in just 35 minutes. A full charge on a 7.4kW home wallbox will take just over six hours, and Fiat also plans to launch its own 3kW home charger, which will be able to be plugged into a domestic socket without requiring professional installation.

The car will let drivers pick from three driving modes. Normal is described by Fiat as being “as close as possible to driving a vehicle with a normal combustion engine”, while Range activates higher levels of brake energy recuperation. This will allow owners to drive the car using only the throttle pedal and anticipating stop situations.

The last mode, Sherpa, preserves as much range as possible, so it limits the top speed to 50mph, blunts throttle response and turns off the climate control and heated seats.

Inside, there’s a bigger jump in design and quality, because Fiat has used the car’s new platform to introduce a cleaner, less cluttered dashboard with improved materials. There should be huge gains in in-car technology too, because the 500 is the first FCA product to get the group’s new UConnect 5 infotainment system. This brings a 10.25-inch high-definition touchscreen with wireless Apple CarPlay functionality and the ability, in future, to offer wireless Android Auto. The instrument panel is now a seven-inch TFT digital display.

The 500 will offer a range of smartphone apps, allowing users to check the charge level of their car remotely, and warm or cool the vehicle before setting off. On-board Wi-Fi is part of the bundle of new technologies on the reborn 500, as is tracking software to help trace the car if it is stolen.

There’s no word on boot capacity but the hatchback should at least match the 182 litres of the combustion-engined Mk2 car. That vehicle will continue to be sold, incidentally; Fiat plans to offer both the Mk2 (built in Poland) and the Mk3 (made in Turin) alongside each other until at least the end of 2021.

What does the new Fiat 500 EV have to beat? Check out our sister site DrivingElectric's list of the best electric cars on sale…